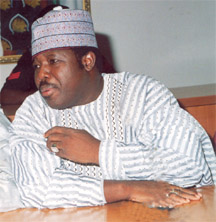 Former Borno Governor of Borno State, Ali Modu Sheriff turns himself into the  Economic and Financial Crimes Commission, EFCC, and he’s reported to be under Interrogation.

The EFCC had said former governor of Borno state Ali-Modu Sheriff may be declared wanted for refusing to honour its invitation.

Spokesman of the EFCC, Wilson Uwujaren said since Modu Sheriff has failed to appear before the commission to explain allegations of financial crimes, he may be declared wanted as is the usual practice.

The ex-Borno state governor was invited to appear before the EFCC in April 2015 over allegations of “misappropriation, embezzlement of funds and abuse of office while he was governor.”

Uwujaren had listed eight former governors who are at different stages of prosecution, some who have been convicted; giving a catalogue of monies, properties, companies and banks accounts recovered and obtained through forfeiture orders.