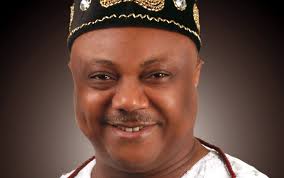 Four time governorship candidate in Delta State, Chief Great Ogboru, has dropped the hint that he may dump the Labour Party for the All Progressives Congress (APC).

Ogboru, who lost the April 11 governorship election in Delta State to Senator Ifeanyi Okowa of the Peoples Democratic Party (PDP) did not deny talks between his political camp and the APC, simply saying that he was still on consulting.

He dded that he has not decided whether to defect to another political party or not.

He spoke to journalists during the wedding reception of Governor Adams Oshiomhole and Iara Fortes at Iyamho Estako West Local Government Area of Edo State.

“This is something I read in the newspapers. There is time for everything. It is not time for that yet. You never can tell when it will happen,” he said.

According To This Report, Security Agencies Are Screening Ministerial Names Submitted By Buhari [see List]