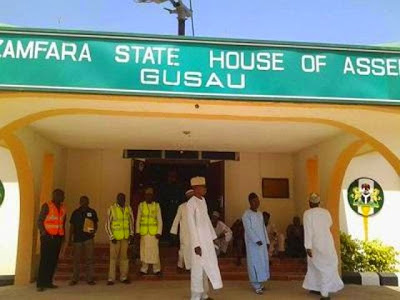 Zamfara House of Assembly on Friday directed its Ethics and Privileges Committee to investigate the fight between its majority leader and the governor’s chief driver over a woman. This followed a “call to order’’ letter by the state APC, Alhaji Lawali Kaura, and read on the floor of the house under “matters of urgent public importance”.

The Clerk of the house, Alhaji Isa Bayero, read the letter which urged the lawmakers to investigate the Monday, May 4 brawl to save the state and the party from embarrassment.

In Case You Missed The Earlier Story About The Fight We Reported, Read Here, Majority Leader & Governors Chief Driver Exchange Blows Over A Woman…..
The Speaker, Alhaji Sanusi Rikiji, directed committee to call on all parties involved, including the woman, security agents, eyewitnesses and other relevant bodies. Rikiji warned that any invitee who failed to appear before the committee, headed by the Chief Whip, Alhaji Abdulmumini Isa, would be seen and treated as a law breaker. The committee is expected to submit its report on June 27.

The News Agency of Nigeria (NAN) reports that the majority leader, Alhaji Salisu Musa (Tsafe North) was involved in an open fight with the governor’s chief driver, Idris Garba. The woman operates a restaurant in Gusau,

The majority leader had told newsmen that he had “business’’ with the lady for some time now. Musa said that during the fight, the driver tried to bite off his fingers but for the timely intervention of the police.

NAN also reports that the matter had generated mixed feelings among people of the state.

“Unfortunate People Had To Be Called To Resign” Babangida Backs Fayose, Asks Mu’azu, Others To Resign