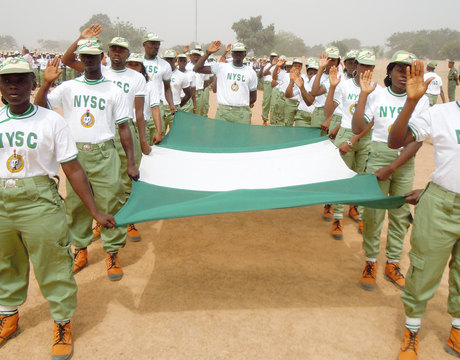 Gov.Tanko Al-Makura of Nasarawa state on Tuesday, promised automatic employment to any newly deployed corps member who marries an
indigene of the state. He made the pledge while addressing 2015 NYSC Batch ‘A’ corp members, during their swearing in- ceremony at Magaji Dan Yamusa permanent NYSC Orientation camp in Keffi Local Government Area of the state.

Vanguard Newspaper repots that the governor said that inter-marriage by corps members would not only foster unity, also promote peaceful co-existence among the people of the state and others states of the federation. He congratulated the corps members for the successful completion of their academic programmes at their various
institutions of learning.

“I urge you to use the lessons and experience you gained during this orientation course to develop yourselves, your host communities, the state and the Nigeria at large.

“You should see yourselves as agent of positive change in the society. “I want to advise you to discharge your duties without fear or favour, and
relate freely with your host communities. “I promise automatic employment to any NYSC Batch ‘A’ corps member who marries an indigenes in
order to promote peaceful co-existence among the people of the state and others states of the country.” Al-Makura said.

Al-Makura also assured the corps members of adequate security throughout their service year in the state. He urged them to be security conscious, and to report any security breach to the appropriate authorities for necessary action.
He urged them to be agents of national unity, and to shun all forms of violence capable of threatening the existing peace of the state and the country at large.

The governor reinstated the state government’s determination to continue to support the scheme, in order to better the welfare of the corps
members. Earlier Mrs. Christy Uba, the Nasarawa state NYSC director, commended Gov.Al-Makura for his support to the scheme in the state. She said since the beginning of this orientation course, the corps members had exhibited good conduct. A total of 1931 corp members have so far
registered at the orientation camp.