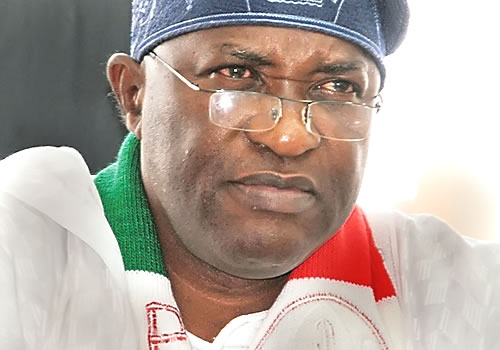 The National Secretary of the Peoples Democratic Party (PDP), Prof. Adewale Oladipo has refused to throw in the towel and pledged his resolve to stay and rebuild the party. He also cautioned party stalwart, Chief Bode George from divisive remarks, capable of plunging the party into crisis.

In a statement signed by the party scribe, he branded calls for the dissolution of the PDP NWC, as the opinion of disgruntled elements within the party.

My attention has been drawn to a communiqué purportedly issued by some PDP leaders in the Southwest calling on me, the National Secretary Prof. Adewale Oladipo and the National Auditor, Alhaji Adewole Adeyanju to resign from the National Working Committee.

According to the communiqué, the resignation was to pave way for the dissolution of the National Working Committee as a fall out of the 2015 general elections.

However, a very careful examination of the inherent breaches in the procedures adopted in the convening of the meeting as well as the content and tone of its resolution shows an orchestration by a few individuals bent on sowing a seed of discord within the PDP fold in the zone.

This is evident in the fact that the said communiqué in no way reflected the views of majority of those who attended the meeting, neither did it tally with the opinion of the generality of our party members in the region.

It is indeed undermining and a clear breach of protocol the fact that a meeting of some leaders of the zone would be convened to discuss issues of the party’s Presidential campaigns and the highest-ranking national officers of the party from the zone were excluded. This is in continuation of the apparent marginalization of the National Working Committee and the party structure at all levels in the handling of the Presidential campaigns.

Moreso, even some of those who attended the meeting were not privy to the agenda and the eventual content of the communiqué issued at the end.

In view of the above therefore, it will be absolutely unpatriotic and against the wishes and aspirations of majority of our party members from the southwest through whose mandate we occupy the offices of the National Secretary and the National Auditor respectively, if we concede to the demands in the communiqué, especially given the fact that as elected members of the National Working Committee, our positions have a tenure which lasts until March 2016.

Moreover, members of the PDP in Osun State, my primary constituency, have already passed a vote of confidence on me in my capacity as the National Secretary.

Furthermore, while some of those asking us to resign performed very poorly even in their polling units, it is on record that the National Auditor and my humble self performed creditably and delivered our areas in the general elections.

It is therefore disheartening that rather than joining other well-meaning members of our great party in supporting the National Working Committee in the on-going re-engineering process to rebuild the PDP, some elders from our zone, particularly, a former Deputy National Chairman, Chief Olabode George, who should know, have instead resorted to divisive politics by attempting to instigate our members against one another.

What our party needs now in the southwest and indeed across the country is for all hands to be on the deck as we work harmoniously in our determination to reposition the PDP to regain power in 2019.

Our party members are by this therefore charged to watch out for individuals whose agenda is to sow seeds of discord and pave way for crisis within our fold for their selfish interests.

The National Working Committee is now more than ever before determined to rebuild the PDP and restore its glory as the preeminent political party in Nigeria. This resolve is irrevocable and we shall not allow ourselves to be distracted in anyway by any person under any guise whatsoever.

Aregbesola Is Not Alone, Rochas Okorocha Is Also Owing Teachers Salaries In Imo