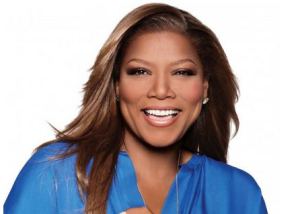 Queen Latifah has said that she doesn’t see being gay or lesbian as a “character flaw”.

The 45-year-old former rapper,TV host and actress has never publicly spoken about sexuality but believes society and the black community need to less antiquated.

Speaking to Uptown magazine, she said: “People’s ideas in general are antiquated when it comes to who you love.

We haven’t moved as quickly as we probably should And the reality is that there’s always been gay people in the black community, so it’s not foreign to us.

And not just as a black community but just a society as a whole.”

“Who you choose to marry is really up to you and it’s not something you should be judged on. I don’t find being gay or lesbian to be a character flaw.”

“Couples should be protected under the laws of this country period. It actually angers me. It’s not unusual so let’s be adults and let’s move forward.”

Latifah, is usually spotted with a rumoured girlfriend Eboni Nichols, stars as a bisexual blues singer, Bessie Smith in her latest film – Bessie.

Speaking about the role she said: “I’m not really sure how people will feel about [Bessie’s bisexuality],’ she replied. ‘It’s not like it’s a secret with her story. She was just free.”

She went on to discuss doing her first ever nude scene: “I’ve never done that before. It was a little odd but it was also a quiet, relaxing thing. “Sometimes she was so alone, and it was a moment for Bessie to acknowledge her vulnerability, which I can completely relate to.

When you get to strip it all down and have a moment to yourself, sometimes the world comes crashing down in that little moment, or maybe it’s a moment of peace. “I don’t find [the nude scene] any more uncomfortable than kissing a girl in Set It Off and sticking to the script. You have to take your mind off of yourself and honor that character.”

Related Topics:entertainmentgaySexualityQueen Latifah
Up Next

Clampdown On AIT: I Warned Nigerians About Buhari’s Hatred For Freedom Of Expression – Charles Novia