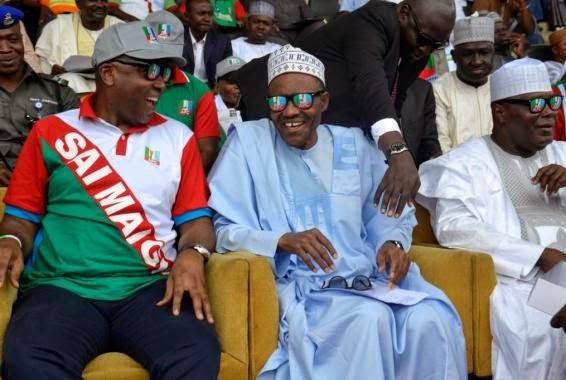 The race for who becomes Nigeria’s number three citizen, President of the Senate of the Federal Republic of Nigeria in an All Progressives Congress – dominated upper chamber beginning from May 29, 2015 is already in top gear.

One of the Major aspirant for the office and former governor of Kwara state, Senator Bukola Saraki is already facing stiff opposition within his party, the APC and the Peoples Democratic Party, PDP, Senators.

Though the APC currently lacks a two-third majority (73), needed for key decisions in the senate, as at our last count of winners declared by INEC, the soon to be ruling party secured 60 seats out of 109 leaving room for PDP’s 49 members.

That number which now makes the PDP a party that is likely to decide whoever emerges President of the senate with it’s votes at the chamber, shows that aspirants must align with PDP senators to emerge victorious when the 8th assembly resumes in June.

Investigation carried out by NewsWireNGR reveals the power blocs against Bukola Saraki as some have argued that based on the role Saraki played in delivering Kwara State to APC and General Muhammadu Buhari, he deserves to become the Senate President.

Contrary to that speculation, the senate President, David Mark’s camp vow not to support Saraki according to a senior official in the President of the senate’s office who doesn’t want his name mentioned in print.

“During the 7th assembly, as a first time Senator, Saraki single-handedly plotted the impeachment of our Principal and did not just stop there, he led a gang of senators who constantly opposed the President and now he needs their support?”

The source continued, “Saraki has never been patient with his desire to lead, the Nigerian Senate is not Kwara state, you don’t become a first time member of the senate and immediately begin to plan the ouster of the leaders you met there for selfish interest”.

Another returning Senator of the PDP who also wants to remain anonymous and pleaded his name is not mentioned said, “Saraki led impeachment move by some aggrieved members of the Peoples Democratic Party in the Senate against Senate President, David Mark.”

“For some of us in the senate, loyalty means a lot, i hear he has been calling everyone pleading to intervene so he can lead the 8th assembly, someone who is so power drunk cannot lead us” he said. “He should learn from David Mark and find out how he eventually led the senate for two terms”.

Bukola Saraki with a pending case with the Economic and Financial Crimes Commission, EFCC, over several fraud-related cases has repeatedly denied allegations of all wrong doings, but a member of his party thinks otherwise.

The spokesperson of the EFCC, Mr. Wilson Uwujaren, had in 2013 confirmed Saraki’s presence at the commission’s headquarters when he said the anti-graft agency was not only restricting itself to the bond issue, but would also look into several financial dealings of the former governor while he was governing the state.

A member of the National Working Committee, NWC, of the the soon to be ruling party, the All Progressives Congress who replied to our message when we tried to enquire about the candidacy of Saraki responded with the following.

“Why do you think that our President- elect, Major General Muhammadu Buhari, is not willing to support any Senator or member of the House of Representatives who has had or still has any corruption case or matter with the anti-corruption agencies or police for the leadership position in the National Assembly?”

The President- elect, in clear terms had last week stated that he is not willing to support any Senator or member of the House of Representatives who has had or still has any corruption case ..

If you missed the story, ‘Forget Senate Presidency or Speaker Position, If You’ve A Case With EFCC or Links To Boko Haram’ – Buhari Insists…

Another source and two time senator from the North Central, who wants to stay anonymous said,” Let Bukola tell Nigerians what happened to Société Générale Bank and his involvement in the bank before we can have the conversation about leading the Nigerian senate”.

Buhari, it was gathered is said to be uncomfortable with most of the aspirants currently fighting for the National Assembly, as they have one case or the other to answer with the anti- corruption agencies especially the Economic and Financial Crimes Commission, EFCC.

But a Saraki loyalist who spoke to us on phone said, “Did Bukola Saraki deliver Kwara State to the APC and General Buhari or not? Did he keep to his part of the deal as expected of him?”. He added, “If he did, then the APC must keep to theirs, Saraki is a major factor to the APC and shouldn’t be betrayed at this point, because the party will only go the way of the PDP”.

When asked to tell us about the deal the party had with Saraki, the anonymous loyalist who has severed the Saraki dynasty for years noted, “I cant give you all details but one thing is for sure, Saraki did not collapse the PDP in Kwara state for nothing, Politics is about interests and that agreement must be kept if one part of the group kept theirs”.

By the conventional zoning arrangement which puts the Nigerian presidency and the vice-presidency under an APC-led Federal government to the North West and South West respectively, it would appear that the North Central may produce the President of the Nigerian Senate post May 29, 2015.

From our investigation, Saraki will be needing more than “GOODLUCK” to emerge winner of the President of the Senate as not just his party members, but also PDP senators are said to be pushing against his candidacy from the David Mark camp.