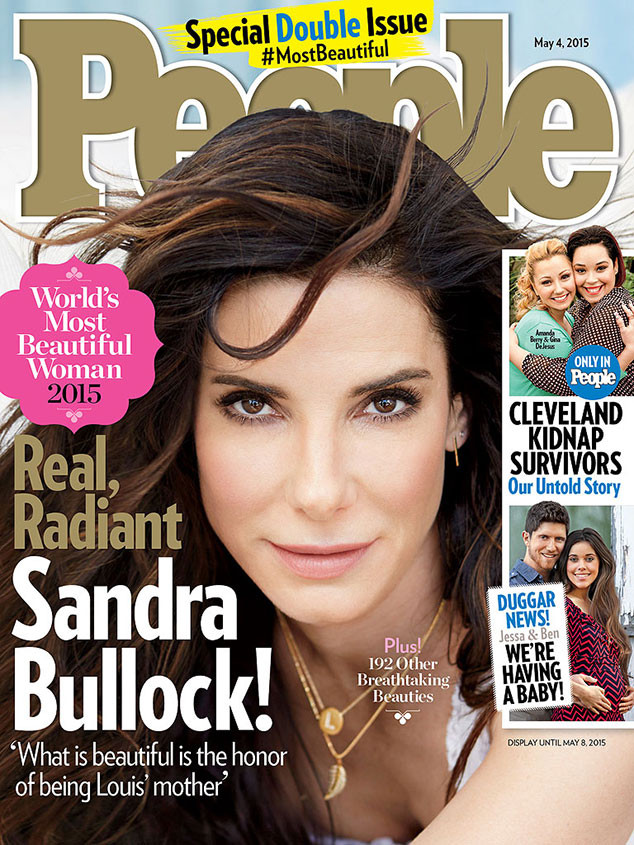 People named Sandra Bullock the “World’s Most Beautiful Woman” for 2015, and no one was more surprised than the actress herself. “No, really. I just said, ‘That’s ridiculous,'” she says.

“I’ve told no one.” The news was announced on NBC’s Today. What does beauty mean to the 50-year-old mom of 5-year-old son Louis Bullock? “Real beauty is quiet. Especially in this town, it’s just so hard not to say, ‘Oh, I need to look like that. No, be a good person, be a good mom, do a good job with the lunch, let someone cut in front of you who looks like they’re in a bigger hurry,” Bullock says. “The people I find most beautiful are the ones who aren’t trying.”

So, what is life like for Sandra and Louis? The Oscar winner jokes that she’s been having “deep” conversations with her son. Recently, Sandra says she was “listening to him tell me why he was going to marry his girlfriend. But then we were having Sunday dinner, and he said he changed his mind. I just told him, ‘Always love those who want to love you back and are nice to you.'” But, like most kids his age, Louis didn’t dwell on his future for long. “We moved back to Legos and ‘Why are you making me eat broccoli?'” the actress says.

“I Almost Committed Suicide” – Tonto Dikeh Writes About Her Struggles