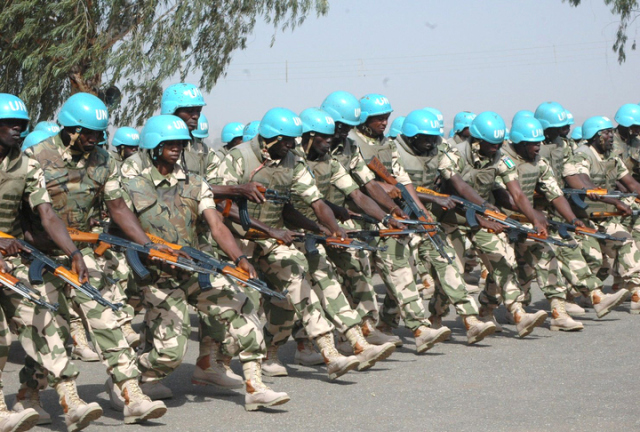 On the anniversary of the abduction of over 200 secondary school girls from Chibok secondary school in Borno State, the National Security Adviser (NSA) retired Col. Sambo Dasuki has given an assurance that the Federal Government was making every effort to ensure that the girls along with every other Nigerian abducted by terrorists are rescued.

Speaking to PRNigeria, a media agency that distributes press releases on behalf of security agencies, Dasuki also promised that Sambisa Forest, the fortress of Boko Haram terrorists and one of their last remaining camps will be stormed and liberated before the May 29, 2015 presidential hand-over date.

“Right now, all Boko Haram camps, except Sambisa Forest have been destroyed,” the NSA said.

According to him, the forest would have since been liberated but for the unfavourable weather condition prevailing in the area as all needed reconnaissance activity and necessary deployment of troops have been made for the operation.

“Every movement of the terrorists is being monitored and every necessary detail is being taken care of to rid the country of the last bastion of terrorists’ infestation”, Sambo Dasuki disclosed.

He insisted that government is concerned about the welfare of every single Nigerian including the girls adding “aside the Chibok girls, other Nigerian girls, boys, men and women were abducted by the terrorists and all efforts are being made to rescue them all.”

While appealing for a little more time to complete the routing of terrorists, Dasuki recalled that before elections were postponed in February, over 20 local governments were occupied by Boko Haram and that most Nigerians were pleasantly surprised that so much was achieved against insurgency within six weeks.

While commending President Goodluck Ebele Jonathan on the successful conduct of the 2015 round of elections, the security adviser however, noted that nobody pressured the President into conceding defeat in the presidential election.

“President Jonathan had already given his words to all the security and service chiefs before the election that he would abide by the decision of Nigerians. At the meeting, he also told them to perform their duties professionally during the polls.

“While we anticipated that he would congratulate his opponent if the result is announced in favour of opposition candidate, he gratuitously without prompting of anyone conceded defeat to the surprise of all.

“By that singular gesture he had saved the security agencies and the nation of unnecessary tension and stress in maintaining law and order and curtailing excesses of likely protesters.”

While commending the fairness of media in the coverage of elections, he nevertheless urged them to be conscious of malicious reports being sponsored by vested interest. He denied a report that he was at any polling units during the last governorship election and was never involved in any meeting with judicial officers to truncate any democratic process.

Immediately after the postponement of elections in February this year, Sambo Dasuki had assured Nigerians and international community that all known terrorists’ camps would be destroyed while most of the occupied communities under Boko Haram in three states of Adamawa, Borno and Yobe would be liberated to allow for peaceful conduct of elections and collection of more voters cards by the electorates.

He said: “All known Boko Haram camps will be taken out. They won’t be there. They will be dismantled. In addition to the acquisition of more sophisticated armaments and training of our troops in guerrilla warfare the new military co-operation agreed to between Nigeria and its neighbours will prove decisive against Boko Haram.”