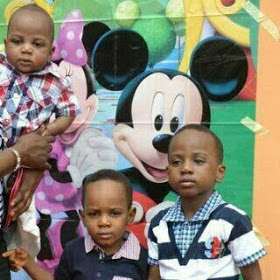 Kidnappers, believed to have abducted the Orekoya kids, through the help of a maid, have demanded a N13 million ransom for the release of the boys.

The kids; Ademola (6), Adedamola (4) and Aderomola (11 months) were abducted by housemaid on April 8, a day into her job as the family maid

The housemaid, Mary Akinloye, a 23-year-old indigene of Ibadan, Oyo State, was said to have been hired through OLX, an online trading portal.

OLX is a South African trading agency, formerly known as Dealfish, that deals in buying and selling online.

It is also a free classified advert website where one can easily post adverts including vacancies for free.

Akinloye was said to have told the kids’ eldest brother, Michael (10), that she was going to buy his siblings’ biscuits.

Yesterday, the Orekoyas got a call, asking them to pay a N13 million ransom.

All the family’s efforts to reach the maid had failed until yesterday. The Ikorodu, Lagos address she gave could also not be traced.

Michael alerted their mother to the disappearance of his siblings when the maid did not return with them by 1pm, about five hours after they left home.

Around 9am yesterday, the children’s mother, Mrs Adebisi Orekoya reached the maid’s phone, but heard a male voice that demanded a N13 million ransom.

The Orekoyas begged to speak with their children and the kidnappers promised to get back to them at 10am.

“They called at 10am and gave the phone to my children; I asked them (two of the children) ‘how are you?’ They said ‘mummy, we are fine.’ The kidnappers then told us to get the money as soon as possible, else…,” she told The Nation yesterday at their Lawanson Road, Surulere, Lagos residence.

A distraught Mrs Orekoya wondered how the woman she decided to help turned to hurt her.

“I just want to appeal to them to return my children; we do not have that kind of money. I wonder what they are given the 11-month old baby to eat since yesterday,” she said.

Mrs Orekoya, who works in a bank, urged the police to help recover her children.

She seemed to have had a premonition of the incidence, saying: “I was supposed to leave home by 6am that day to resume work by 7:30am but I couldn’t leave until 7:30am. Despite that I kept returning to our apartment from downstairs, asking the children if they were alright. They replied ‘yes.’ I will go downstairs again and return up stairs, going to their (children’s) room asking again if they were alright and they would say ‘Yes mum.’ That was how I left home after the third time of doing so; it’s unfortunate that it turned out this way.”

He said the Divisional Police Officer (DPO) of Itire Police Station, Isah Abdulmajid has visited the family, adding: “We hope the security agents will help with their (children) release.”

The Nation saw family members and other well wishers in the sitting room, commiserating with the Orekoyas.

He said efforts were on to nail the culprits and rescues the children.

“All hands must be on the deck to rescue the children,” he said.