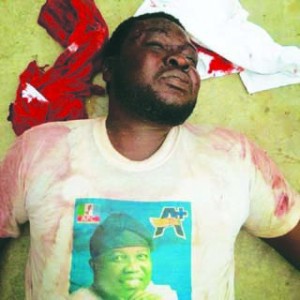 For allegedly decamping from the Peoples Democratic Party (PDP), to the All Progressives Congress (APC) an influential area boy in Oshodi, Lagos State, popularly called Baba Esi was shot dead on Thursday April 9 at Oshodi by unidentified gunmen.

PM News is reporting that Baba Esi, whose real name is Ismail, was a staunch supporter of PDP in Oshodi and was largely credited with the victory recorded by the PDP in Oshodi-Isolo where the party’s candidate won the House of Representatives seat, before he defected to the APC a few days ago.

He was said to have visited the Ikoyi home of a top APC chieftain in Lagos on Wednesday Aril 8 on invitation where he was persuaded to decamp to APC.

To demonstrate his affiliation with his new party, he allegedly mobilised his supporters for a rally on Thursday at Oshodi. Some of his supporters were said to be unhappy with his move and did not join the rally.

Different accounts of how and why he was killed have gone round gatherings, on Thursday April 9, Oshodi was thrown into a state of confusion when news of his murder was made known.

One version of the story had it that Baba Esi was killed by his colleagues who felt betrayed by his decision to defect to the APC.

His colleagues allegedly accused him of not carrying them along in his decision to defect to the APC.

“He abandoned us. He went to meet a top APC chieftain in Ikoyi (name withheld) and was persuaded to dump the PDP. Instead of him to carry us along, he abandoned us,” a member of the Oshodi Under Bridge gang who volunteered information on the murder told P.M.News.

Another account of the murder revealed that the popular area boy was allegedly killed by supporters of a top NURTW chieftain in Oshodi during a rally to drum up support for the APC.

The late Baba Esi’s supporters and those of the APC chieftain reportedly clashed and Baba Esi was shot dead.

“It was a straight forward political assassination. Somebody felt he was intruding on his turf and felt the best way to go about it is to remove him from the face of the earth,” a popular landlord with a street named after him told P.M.News.

Meanwhile markets have been shut in Oshodi area of Lagos, following the death of Essy Oluwo.

“This killing is recurring and nothing has been done about it. We are carefully watching to see if there won’t be retaliatory attacks, because the guy has his loyalists among the thugs,” Ajibandele stated.

How The APC Plans To Rig Lagos Polls For Akinwunmi Ambode, PDP Alleges