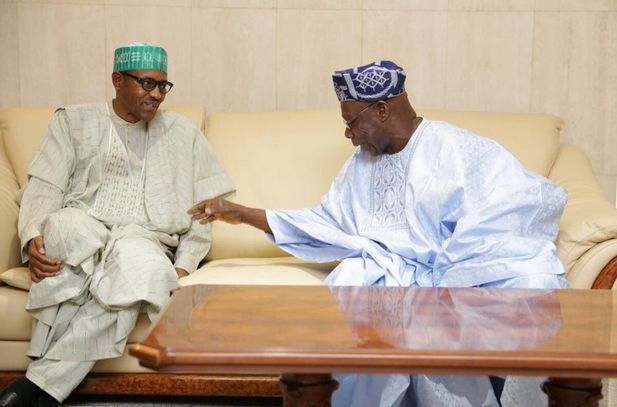 Nigeria’s Former President, Olusegun Obasanjo met with President-elect, Muhammadu Buhari in Lagos and other All Progressives Congress chieftains as they got set to campaign for their governorship candidate in Lagos state, Akinwunmi Ambode.

Following the victory of the APC, at the presidential elections, internal politicking over the formation of the cabinet of president-elect, has started in earnest.

Sources say, apart from meeting to congratulate General Buhari, Obasanjo and GMB along with Amaechi, the APC leaders talked about the transitional government and appointments.

The Former President who also saw to the ouster of Jonathan with his criticism and lobbying within the power brokers in the country is currently lobbying for the former Central Bank of Nigeria (CBN) Governor, Professor Chukwuma Charles Soludo as the possible Minister of Finance for the Buhari administration amongst other possible appointments.

A source who was privileged to the meeting earlier today and does not want his name mentioned as he wasn’t authorised to speak on the matter said, “Bola Tinubu is seriously kicking against Soludo’s emergence.”

He said, ” Baba met with GMB for the first time since elections to congratulate him and also talk about the transition and possible names to be appointed to assist General Buhari to succeed”.

The anonymous source who did not want to say more on the conversation added that, “Baba also spent time with Rotimi Amaechi who is seen as one of the voices Buhari listens to and will likely influence decisions by GMB”.

He continued, “Amaechi and Tinubu do not see eye to eye but the two have been managing themselves but the truth is that Obasanjo doesn’t want to take chances, so he met with Amaechi to have a one-on-one as well before they left for Orile, venue of Ambode’s campaign”.

Soludo perceived to be Obasanjo’s “Boy” had been heavily critical of the economic policies of the Jonathan administration, a stand many believe Obasanjo had instigated.

The most critical was in the build up to the general election where he alleged that the current administration mismanaged over N20 trillion from the federation account.

His criticisms, which were published in major newspapers and websites, unsettled the Jonathan administration with the Minister of Finance, Nigozi Okonjo-Iweala, taking on Soludo in more than one rejoinders.

Buhari is expected to constitute his transition team which will consist of politicians and private sector players that will ensure his smooth takeover from the outgoing President Goodluck Jonathan administration.

The team which will be announced soon is expected to commence work with the presidency after the governorship and state assembly elections.

Tinubu is expected to make inputs into the list but his choices might see him clash with Buhari. A chiefain of the APC said that he was aware that Buhari wants a good mix of politicians and private sector players as members, and would likely review the list of members Tinubu selects.