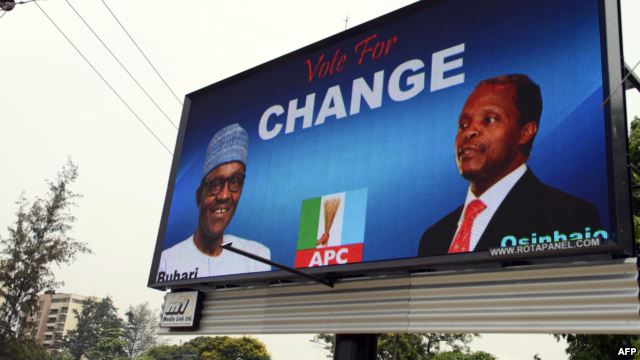 by Chris Stein for voanews

Change. It was the word printed on Nigerian billboards, shouted at rallies and uttered in greeting among supporters of Muhammadu Buhari and his All Progressives Congress party. And it worked. This week, Buhari made history by unseating incumbent President Goodluck Jonathan in a democratic election.

Now comes the hard part: making good on promises he made on the campaign trail.

“There was no doubt about the argument for change, in terms of juxtaposing the incumbent president with the president-elect,” Ngwodo said. “… Buhari certainly represented a departure from him” in style, substance “and in temperament as well.”

Now he has to deliver. Buhari’s promises include an end to the Boko Haram insurgency, which has ravaged the country’s northeast in its quest to impose strict Islamic law. He also campaigned on cutting down corruption and implementing universal healthcare.

But when he takes office in May, Buhari will inherit a government that is borrowing to pay its bills and still has not passed a 2015 budget. Chuba Ezekwesili, a research analyst at the Nigeria Economic Summit Group, said promises of spending on social programs, such as universal health care, may end up on the back burner.

Ezekwesili said most of Nigeria’s budget goes toward “recurrent expenditure,” covering salaries and expenses but not capital costs. “If we’re already at the point where we’re borrowing money from the World Bank to pay for the 2015 salary,” he added, “then it shows that we are in a dire situation.”

Much of Buhari’s campaign centered on snuffing out Boko Haram, but the militant group is perhaps at its lowest point in years. Over the past few weeks, the Nigerian military, with help from foreign mercenaries and troops from neighboring countries, has chased the militants out of almost all of the towns they overran in the northeast.

Dawn Dimowo, a Nigeria-based analyst for the Africa Practice consultancy, said it will be up to Buhari to figure out how to put the group down for good.

She said it might mean creating something like the Niger Delta Development Commission, a federal program with a stated goal of regional growth “that is economically prosperous, socially stable, ecologically regenerative and politically peaceful,” as its website says.

Any proposal will have to tackle the social and economic problems fueling the insurgency, Dimowo said. It must “address specific issues in that part of the country … [and] the hostile environment that would allow that kind of radical ideology to foster and develop to the point that this group to be able to take over a part of the country.”

But because cash is short, Dimowo said, tackling those problems may have to wait.

T.B. Joshua Declares That He Saw Jonathan’s Defeat Before Polls