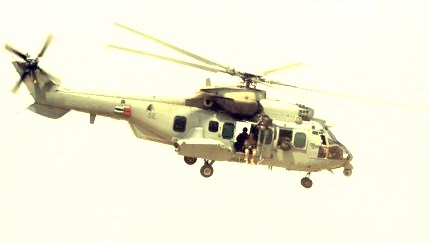 Niger and Chadian soldiers have been fighting the Islamist militants in a joint mission with Nigeria and Cameroon since March 2, in a bid to end Boko Haram’s six-year insurgency in northern Nigeria that is threatening regional stability.

The helicopters destroyed several vehicles and motorcycles carrying fighters in the Nigerian village of Djaboullam, which lies east across the border from the Niger town of Diffa, the Niger officer said.

“Niger and Chad had received intelligence that a group of Boko Haram fighters had gathered in the border village,” the officer said.

The Niger military officer, who requested anonymity, said Boko Haram fighters had moved to Djaboullam after they were chased from other towns by the Nigerian army. Militants were also gathering in other border towns from where they routinely launch mortar rounds into Niger, he said.

“We know they are massing in Malam Fatori, waiting for us to come,” he said, referring to another northeast Nigerian town about three kilometres (2 miles) from Bosso, the nearest town across the border in Niger.

The regional offensive launched this year comes as Nigeria, Africa’s most populous country and biggest economy, prepares to hold elections on March 28.

The offensive has succeeded in driving the militants from several towns and districts they previously held. Chad and Niger forces captured the town of Damasak from the militants last week.