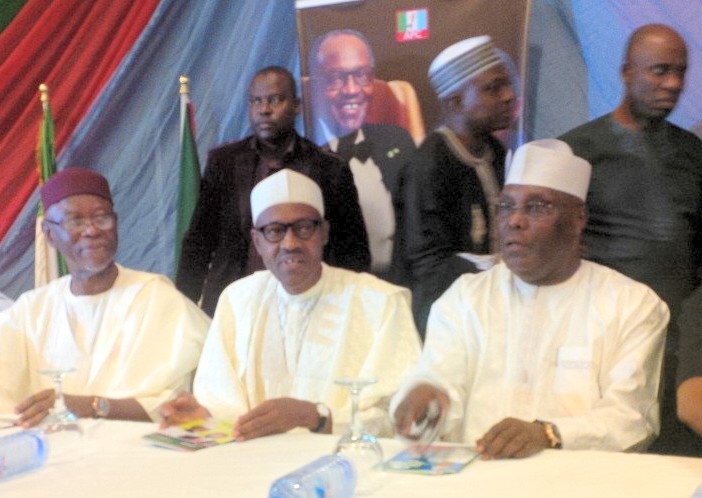 A melodramatic scene was played out at the interactive session between the All Progressive Congress (APC) Presidential candidate, Muhammadu Buhari’s interactive session with the media in Abuja on Tuesday. The governor of Rivers state and Chairman of the APC Presidential Campaign Organisation, Rotimi Amaechi, had to intervene, preventing the former Head of State from answering a question on the jailing of journalist, in 1984.

Chairman of ThisDay newpaper and NPAN boss, Nduka Obaigbena, who anchored the event, had literally, lite the fire, that sparked the mini furore. He asked if Buhari would apologise for jailing two journalists when he was a military ruler.

However, Amaechi, director-general of Buhari’s campaign organisation, grabbed the microphone from him and said: “Buhari has said he cannot change the past, so that settles it.”

As expected, the audience went up in a gale of laughter. Speaking after some calm had returned, Buhari observed that insecurity, ailing economy and corruption were the major problems facing the country. He promised to tackle them headlong reclining on the manifesto of the APC as the fount of his administration’s agenda.

“Our country is on the verge of something new. The tide has turned and the world can sense the wave of change that is about to flood this nation. In less than two weeks, the Nigerian electorate will head to the polls to make their voices heard. Through the ballot, without a single shot fired, a change revolution will likely take place,” he said to the audience comprising newspaper proprietors and editors.

“There are two specific reasons why I have invited you here today. The first is to use the opportunity to say a special thank you to the Nigerian media for the role you have played in advancing our country’s democracy thus far, and especially for being a platform through which Nigerians’ cry for change was articulated all around the world.

“On newspaper pages, TV screens and radio waves, the alarming depth of corruption and impunity in our country, the terrifying level of insecurity, and the grim state of our economy were kept constantly before the world’s eyes, making it impossible for the current government to doctor the truth, despite their meanest efforts.

“I urge you to not relent in your role as watchdogs, to continue to be the voice of the people. The health of Nigeria’s democracy rests partly on you. Without a robust and thriving media, the masses would have no voice. The electorate would also not have sufficient information to make sound decisions, such as deciding to vote out a clueless government and vote in change.”

Buhari also assured the media of right of free expression, adding that his government would give the industry more freedom to operate as the watchdog of democracy.

“Secondly, I want to give you my full assurances that in this democratic dispensation, I will ensure that the Nigerian constitution is upheld. This includes respect for the media, respect for the right to free expression and freedom of speech,” he said.

“Page 1 of 2 any of you are aware of Decree 4 of 1984, which was heavily criticised. I have said elsewhere that I cannot change the past. But I can change the present and the future. Dictatorship goes with military rule as do edicts such as Decree 4. However, I am a former–former, note the emphasis on the word ‘former’–military ruler and now a converted democrat, who is ready to operate under democratic norms. I am not only subjecting myself to the rigours of democratic elections for the fourth time, but even after being elected, I will continue to promote the consolidation of democracy in our great country, Nigeria, by guaranteeing that the media’s freedom is not compromised in any way.

“I give you my full assurances that the Nigerian media will be free under our APC government. I also want to use this opportunity to appeal to you to use your media outlets in shaping positive public discourse and eschew hate speech mongering and slanderous political rhetoric which heat up the polity for the sake of peace and stability of our dear nation.”

Reacting to a question on whether he would form a unity government when he is elected president, the APC presidential candidate simply said it was left for his party to decide that.

The former General also gave a brief answer on his decision not to participate in presidential debates, Buhari stated that there was nothing to debate “after 16 years of Peoples Democratic Party (PDP) misrule”.