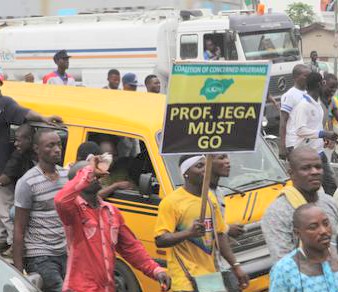 In the aftermath of Monday’s protest by the Oodua Peoples’ Congress, OPC, factions within the group have risen up to dissociate themselves from the call for removal of Attahiru Jega, Chairman of the Independent National Electoral Commission, INEC.

It would be recalled that the Gani Adams’ faction of the OPC, accompanied by members of the Goodluck Jonathan Campaign Organization, took to the streets in Lagos to demand the removal of the INEC boss ahead of the March 28 general elections.

Mr. Adams said the rally was not partisan, but a call for Mr. Jega to be removed from office.

“What we protested for was the removal of Jega over the poor distribution of PVCs in the south, registration of underage in the north and creation of additional 30,000 polling units in the north,” Mr. Adams said

It was reported that some of protesters allegedly, harassed motorists and passers-by while others vandalized campaign posters of political parties, particularly those of the All Progressives Congress, APC.

Last Friday, the Movement for the Actualization of the Sovereign State of Biafra, MASSOB, held similar protests across the South Eastern states of Anambra, Enugu, and Ebonyi where they accused Mr. Jega of incompetence.

As though in accordance with APC’s warnings, On Sunday, the APC claimed it had uncovered a plot by the ruling Peoples’ Democratic Party, PDP, to use ethnic militias to protest for the removal of Mr. Jega.

But Mr. Adams accused the APC and Lai Mohammed, its National Publicity Secretary, of peddling falsehood, adding that Monday’s protest was peaceful.

“Nobody was attacked. Lai Muhammed should stop peddling lies against our members,” Mr. Adams said.

“Nobody touched their bill boards. It’s the most peaceful rally I have seen. Even they, APC, cannot hold a peaceful as successful rally ?as that. As a matter of fact, over 30 Nollywood stars took part in the rally including myself.”

Another faction of the OPC responded swiftly and angrily on Monday, accusing Mr. Adams of betraying the group and the Yoruba people.

“We, the members of the National Coordinating Council of the Oodua People’s Congress, OPC, the highest ruling body of the organization, wish to disassociate ourselves from the shameful, destructive, violent and reactionary activities of the Gani Adam-led team which occurred in Lagos today,” the group said in a statement.

“What was witnessed today in Lagos was the highest level of political violence sponsored and funded by certain elements in the Jonathan government.

“Gani Adams is on his own and does not enjoy the support of a large size of our membership spread across the country. He is working for the sponsors of violence against our people who want the March 28 elections not to hold. Unleashing terror on innocent citizens and killing them is not the way of democracy. It is not our idea of a people-oriented advocacy.”

In 2013, the Mr. Adams-led faction of the OPC secured a lucrative contract from the federal government to secure crude oil pipelines in the South West.

At the time, Mr. Adams justified the contract by claiming that President Jonathan had also awarded similar contracts to Niger Delta militants and that the OPC deserved its share.

“For a group that has been doing a lot of things for the society free of charge, it is not too much to apply for a security job,” Mr. Adams had said.

In its statement, the faction accused Mr. Adams of being on “dubious project” and using the pipeline contract from the government as an excuse to recruit people to work for Mr. Jonathan and PDP in the South West.

“Gani Adams is acting against Yoruba interest. The compromises he has made amounts to selling the Yoruba to the present government for a piece of Pipeline contract to line his pockets,” the group said.

“OPC is not about pipeline contracts or any other contracts for that matter. The Yoruba interest is beyond contracts. We seek justice and fairness from the current government.”

The group called on Yoruba sons and daughters to join them in condemning Mr. Adams and his “anti-democratic tendencies.”

“We must renounce him and remind him he cannot sell the Yoruba race to Jonathan and PDP on the cheap. He also has no authority to speak on behalf of the Yoruba people,” they said.

“We pity those who rely on him to win votes. They will be sorely disappointed. Their investment is a bad one already. We reject today and always any attempt to use our organization and its members for narrow and selfish partisan purposes.

“We must remind them that the Yoruba people cannot be hoodwinked by sweeteners. No one should expect them to kow tow to an individual who is a Lilliputian in the political development and history of the Yoruba nation.”

While renouncing Mr. Adams and his activities, the group also renounced other Yoruba sons and daughters who are playing roles inimical to the welfare and interest of the South West.

“We call on our people to be vigilant politically at this time. Nigeria needs a new leadership, a new direction and a country that works.”