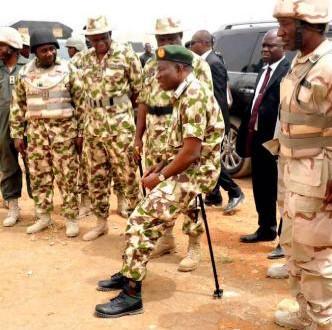 President Goodluck Jonathan on Tuesday in Abuja said that utmost care was being taken by the Federal Government to avoid collateral damage to the lives and properties of civilians as the military intensifies its ongoing offensive against Boko Haram.

Speaking at an audience with the new South Korean Ambassador to Nigeria, Mr. Noh Kyu-Duk, President Jonathan said that everything possible was also being done by the military to avoid human rights violations in the theatre of operations in the North Eastern states. “We are sticking to international best practices in prosecuting the war against terrorism and doing our best to ensure that we don’t have cases of human rights abuses in the North-East.

“We are consistently monitoring the situation and have investigated previous reports of such abuse which were mostly blown out of proportion for political reasons. “Our military has a reputation for discipline and we have insisted on that discipline and control for the safety of civilians in the North-East. “The purpose of the entire operation is to save our people from the brutal tyranny of Boko Haram, so we cannot tolerate human rights abuses or willfully impose further suffering on them,’’ President Jonathan said.The President also told Mr. Kyu-Duk that Nigeria’s entire security architecture was being reviewed, restructured and strengthened to ensure greater safety for Nigerians and foreign workers in all parts of the country. “We are inviting all our friends in the international community, particularly those that are more technologically advanced, to complement our efforts to build a more secure and prosperous country in which our people and foreigners can live in peace and safety,”

President Jonathan told the new South Korean Ambassador. The President urged Mr. Kyu-Duk and his Indonesian counterpart, Mr. Harry Purwanto, who was also at the Presidential Villa to present his letters of credence, to work for the strengthening of existing trade and economic relations between Nigeria and their countries.

The new ambassadors thanked President Jonathan for receiving them and assured him that they will do their best to promote stronger economic and cultural relations between their countries and Nigeria during their tenure in Abuja.