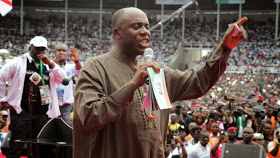 The Governor of Rivers State and Chairman of the APC Presidential Campaign Organisation, Chief Rotimi Amaechi has called on the masses in Rivers State, to keep aside their brotherly ties and vote, as their stomachs lead. Chief Amaechi stated this yesterday, while campaigning for APC at the Degema Obonoma and Abonnema communities in Degema and Akuku-Toru Local government area of Rivers state.

Gov Rotimi Amaechi was quoted as saying to the people to vote for their stomach and not because their brother, President Jonathan was in the race to be re-elected as President.

“This election is not about brother, it is about your stomach. If dollar likes, it can get to N300 or N400 to a dollar, the President can afford it but you can’t afford it. Now they tried everything possible to stop the dollar from losing control. They couldn’t because the economy will determine whether the dollar will lose control or not and the economy has done that already. Another one is fuel. They have done everything possible to pay for fuel. They can’t pay. The money is not there. Now, there is fuel crisis.

INEC Currently Processing Over 10,000 PVCs For Eligible Voters In Gombe