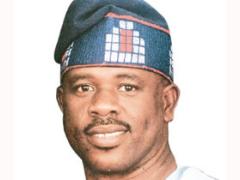 The leadership of the ruling Peoples Democratic Party has distanced itself from the ongoing controversy over the Ekiti rigging tape in which some senior members of the party were heard planning how to rig the governorship election held in the state on June 16 last year.

In the recording, Ekiti state Governor, Ayodele Fayose; a former Minister of State for Defence, Musiliu Obanikore Obanikoro, former Senator Iyiola Omisore and other individuals were heard discussing with a serving Brigadier General of the Nigerian Army, Aliyu Momoh, on how to use the military to rig the election in the state.

Most of the actors involved in the saga admitted there was a meeting, but they all denied that rigging was discussed.

In an exclusive interview with PREMIUM TIMES, the spokesperson of the PDP, Olisa Metuh, said those mentioned in the scandal did not carry out the alleged rigging scheme on behalf of the party.

He said the party does not want to get involved in the controversy triggered by the leaked recording and would rather prefer that those mentioned in connection with the matter respond individually.

He said the PDP as a party has never requested anyone to rig on its behalf and will never be engaged in electoral malpractices.

“Any tape whether real or imaginary can be concocted in this digital world; we don’t know what is real and what is not,” Mr Metuh said. “I also believe that the actors in their personal capacity will be able to talk about what really happened.

“As a political party, we have never engaged in planning or getting involved in any conspiracy to rig elections or alter the will of the people,” Mr. Metuh said.

He also said the party has so far demonstrated maturity in elections held in the last two years.

Mr. Metuh admitted that he had not listened to the recording but wondered whether the tape was even authentic at all.
“We had elections in five states in the last two years, PDP won in only one state; how comes its just that one that we won, that a tape is suddenly surfacing to say we planned rigging.

“Why did we not plan rigging in Edo, Ondo, Anambra and Osun? How comes the only one that we won is the one they want to tarnish? It is a calculated attempt to sway the minds of Nigerians that the PDP is not capable of winning in a free and fair election.

“Our people are even raising the fact that we were rigged out in Osun; but we are not engaged in propaganda, we are not engaged in manufacturing tapes, We won election in Ekiti state because of the love of our party, and the massive support that our gubernatorial candidate, Ayo Fayose, enjoys in the entire state.

The PDP spokesperson said the Ekiti tape saga is just another propaganda by the APC, saying if the APC is sure of the authenticity of the tape, it should approach the law courts to seek redress.

” In this era of campaign, where you have a lot of propaganda, anybody with any concrete evidence can go to either the law enforcement agencies or the law courts to seek redress.

“For us, we are more involved in the campaign than propaganda; our first thought actually is that it is simply just propaganda, it is only the court that can decide if on the matter of Ekiti election, just like the tribunal and court of appeal have decided. If they think there is fresh evidence, they can go to court,” he said.