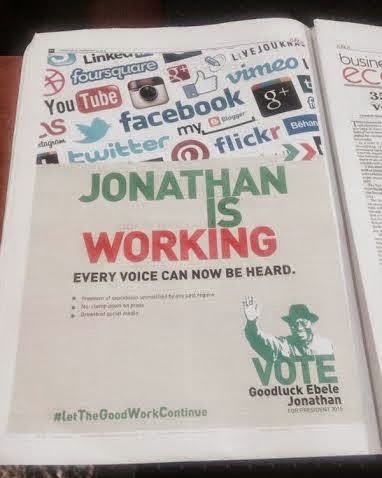 The 2015 Politiking and campaign is still on and for the most parts, supporters of the ruling party, the Peoples Democratic Party, PDP, the Goodluck Jonathan’s regime didn’t just sign to the Freedom of Information Bill, it allowed for absolute freedom online.

For opposition, All Progressive Congress, APC and Critics of the regime, that argument will always be in doubt as media houses from Leadership Newspapers to Punch had in the past been harassed over publications .

But today, the President’s supporters went further by publishing an ad to remind the “online children of anger in the words of Reuben Abati that their voices are being heard thanks to him…

…The growth of social media is an achievement of this present government. Every voice can now be heard…:-)