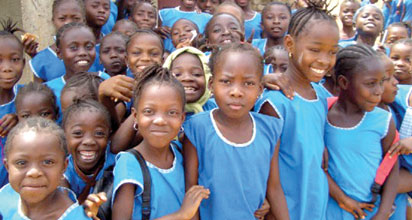 The United States Government has donated two million dollars to support the Safe School Initiative of the Nigeria Business Community and the Federal Government for education of children across the country.

The Minister of Finance, Dr Ngozi Okonjo Iweala, announced this at the signing of the Memorandum of Understanding (MoU) in Abuja on Thursday.
She said the gesture marked strong collaboration between the United States and Nigeria.

“Today, I am happy to announce that the US Government, through the USAID, has donation two million dollars into this Multi-Donor Trust Fund and we are here to witness the signing of the MOU.

“I am also happy to inform you that the government of Qatar, through the Qatar Foundation, has also made a contribution of two million dollars into the fund.

“As you are aware, the safe school initiative was launched by the President and the UN Special Envoy on Education, Mr Gordon Brown in effort to make schools across the country a safe environment for children to learn.

“It is also to help teachers to teach, so that we will never again experience the abduction of school children from schools, like it happened in Chibok community’’, she said.

She added that since the inauguration of the initiative, the FG had built strong partnership with government donor agencies and private sector.

According to her, a trust fund domiciled at the Central Bank of Nigeria has been set up with 10 million dollars contribution from the Federal Government.

“We have also received donations of two million euros from Germany, and will shortly receive a grant of one million dollars from the African Development Bank.

“Other donors include Norway with 1.5 million dollars, given through the UNICEF and the UK with one million pounds in technical assistance.

Okonjo-Iweala said to complement the effort, a separate Multi-Donor Trust Fund (MDTF), had been set up within the UN system through Gordon Brown’s effort in support of the initiative.

She said the MDTF was being managed by the UNDP, UNICEF and UNOPs adding that it would help to harness donations from other governments and donor agencies, among others.

On the operations of the initiative, she said that government had provided full scholarship for 2,400 school children from Adamawa, Borno and Yobe to enable them to transfer to 43 federal unity schools across the country.

She said that after receiving counselling, the first batch of 1,007 affected students would go to school adding that their parent would receive grants to visit them in schools.

“The pupils will also receive grants to ensure that they can go home when school closes.

“About 44 school children from Chibok will be among the second batch, which we are currently processing’’, she said

Okonjo-Iweala said the federal government was partnering with international NGOs to offer scholarship to some victims of insurgency to study in universities abroad.

She added that with the support of the UNICEF, education would be provided to children in Internally Displaced Person’s (IDPs) camps and host communities.

She said 28,679 children had been enrolled in basic education through the double shift schooling system operational in Adamawa, Borno and Yobe.

“And of these, 1,692 have been enrolled into Junior Secondary School, through UNICEF. We have also procured 35,000 school bags with learning materials and `400 school in box’ to support the IDP learners,’’ she said,

The minister said that 400 security scanners to be installed shortly in schools in Adamawa, Borno , Yobe and other parts of the country, had been purchased.

The US Ambassador to Nigeria, Mr James Entwistle, said the aim of the donation was to support education of children especially from northern Nigeria where enrolment was low.

He said that it was also part of his government’s support to Nigeria’s effort to fight terrorism.

“The US government is proud to support this initiative. Nigerian children who have been affected by insurgency do not need to see their hopes for education sacrificed’’, he said.

He added that the initiative would manage school based interventions, such as the improvement of infrastructure and furnishings, provision of teaching and learning materials, among others.

Related Topics:EducationUSDonorsSafe School Initiative
Up Next