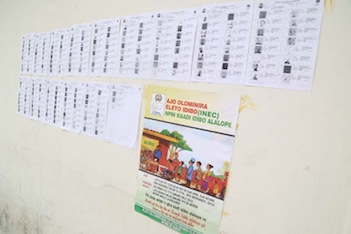 Following the rescheduling of the 2015 general elections, the Independent National Electoral Commission (INEC)  has once again extended the deadline for collection of Permanent Voter Cards by registered voters.The commission in a statement signed by its Secretary, Mrs. Augusta Ogakwu, said collection of the cards will continue for four more weeks until March 8th, 2015.It would be recalled that INEC had, on Saturday, February 7, 2015, rescheduled the 2015 general elections due to security challenges. The national elections (i.e. Presidential and National Assembly) have been rescheduled to hold on March 28, 2015 while the state elections (Governorship and State Assembly) will now hold on April 11th 2015.“The Commission hopes that this extension will finally avail every registered person yet to collect his/her PVC the opportunity to do so in readiness for the general elections,” Ogakwu said

Related Topics:INECPVC collection
Up Next