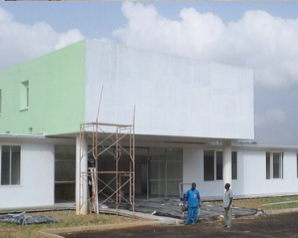 Ivorian football legend and Chelsea striker, Didier Drogba is renowned for his great goals, as well as his charitable works in Abidjan, his hometown. The striker recently showed off the first of five clinics, in Abidjan, Cote Ivoire which his charity Foundation has almost completed. He wrote; “Happy to announce our 1st clinic in Abidjan is nearly finished. We will host next charity ball for the foundation on 18th April in London – more info soon! #didierdrogbafoundation”

Through his charitable foundation, the former Ivory Coast captain and erstwhile Galatasaray forward, had announced in July 2013, that he will help fund the construction of five clinics specializing in children and women’s health spread throughout the country. The announcement was made by Didier Drogba Foundation secretary Guy Roland Tanoh, who said that the projects are being funded by the organization’s London galas and Drogba’s personal contributions.