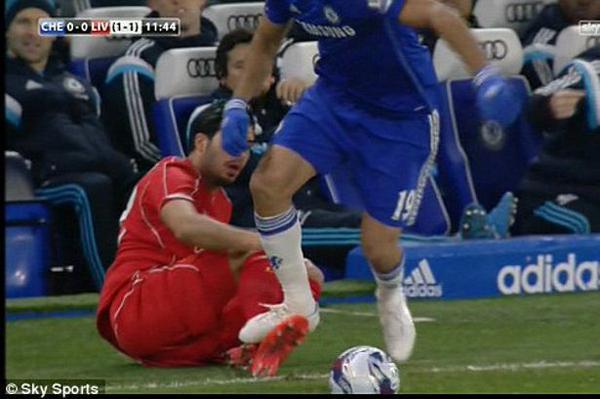 Chelsea and Spain striker, Diego Costa has been banned for three games for stamping on Emre Can during the return leg of his club‘s FA Cup clash with Liverpool on Tuesday, January 27, 2015.

The former Atletico Madrid striker who was charged by FA with violent conduct on Wednesday, January 28, 2015, was handed the ban today after he was found guilty of stamping on Liverpool’s Emre Can.

A statement from Football Association confirmed the ban after the striker’s appeal against the charge was not enough to convince the FA’s disciplinary committee. ‘Diego Costa will serve a three-match suspension with immediate effect after a charge of violent conduct against him was found proven by an independent regulatory commission today (Friday, January 30, 2015).

‘The Chelsea forward had denied the charge in relation to an on-field incident involving Liverpool’s Emre Can which occurred in the 12th minute of the League Cup semi-final second leg at Stamford Bridge on Tuesday, January 27, 2015.’