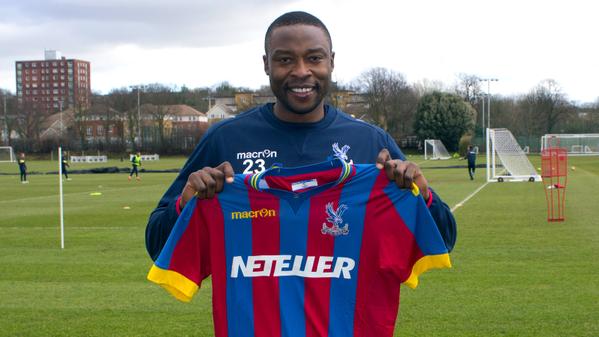 English-born Nigerian international and former Newcastle United forward, Shola Ameobi, has joined Premier League side, Crystal Palace, on a short term deal, from Turkish side, Gaziantep. The 33-year-old got left Newcastle United in the summer, where he spent 14 years after breaking into the first-team from their academy.

In nearly a decade and a half on Tyneside, he appeared 397 times for the Magpies, scoring 79 goals, winning the Championship in 2009/10 and representing the club in the UEFA Champions League.

“I’m very excited to be here, I wanted to get back in the Premier League and having worked with the manager before, it’s been great to come back and hopefully help us avoid the relegation battle,” he said.

“I had a couple of other clubs interested but I think my relationship with Alan (Pardew) and how much I enjoyed working with him was one of the big factors in my decision.

“He instils confidence in players and he always seems to get the best out of them, certainly he did that at Newcastle and hopefully he can do that for me and the rest of the lads here,” the elated Ameobi told Crystal Palace official website.

Ameobi has also won 10 caps for Nigeria where he was born before moving to Newcastle as a youngster. He represented the Super Eagles in the 2014 World Cup, having previously won 20 caps for the England under-21 side.

He is no stranger to Palace boss Alan Pardew, having played under him for Newcastle for four years before moving to Turkey in the summer on a free after his contract expired. He scored four times in 11 outings for Gaziantep before returning to England just before the new year.

Breaking: No Environmental Sanitation In Lagos, To Ensure PVC Collection