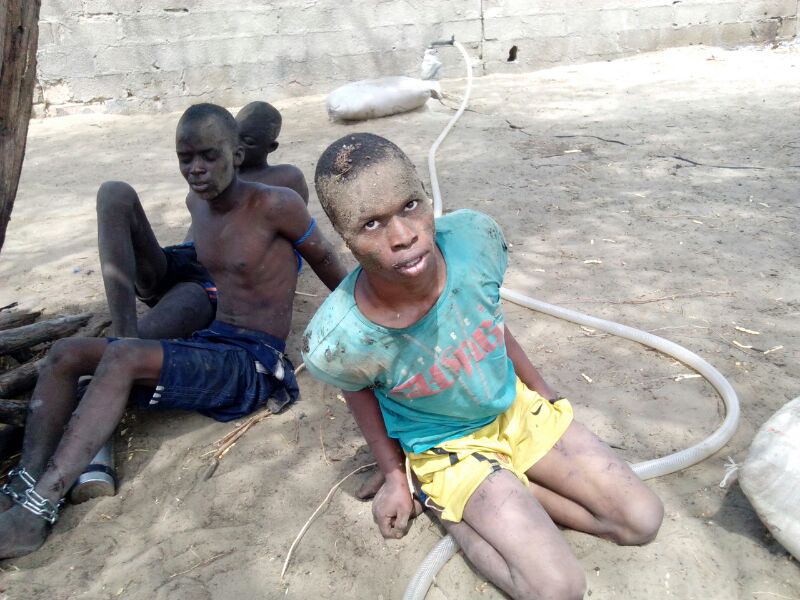 The multiple attacks by Boko Haram on Maiduguri, Konduga and Monguno in Borno State early in the week was a desperate and diversionary attempt to both pre-empt a massive onslaught and create avenue for escape for insurgent commanders. [Pictured, Some-suspected-terrorists-captured-during-a-recent-operation]

But the most callous aspect of the attacks was the conscription and deployment of child-soldiers, teenage-female suicide bombers and animals to frustrate troops.
Senior military officers knowledgeable about military tactics and operations concerning plans to launch the “wipe off” attack on terrorists infested locations in the north east told PRNigeria that the attacks on the three towns could be a further confirmation of allegations that there were Boko Haram moles in high places.

It is common knowledge that the military were preparing a comprehensive onslaught on the Boko Haram terrorists in an operation meant to rid the entire region of insurgency in time for the February general elections.

According to a source, weekend’s multiple strike by the insurgents was meant to slow down or even prevent and divert the attention of the military from commencing the determined operation against them.

The source added that the pattern of the attack was also common to the terrorists who embark upon such desperate and unlikely to succeed attacks just to create room for terrorists’ commanders to escape from their camps in view of impending military raids in the areas.

The source said: “The increasing use of child fighters and women in their campaign of terror in the recent encounter is quite baffling. They used animals, armed children and occasional women to confront the soldiers while their commanders operate from the back and mostly in the armoured vehicles”

Some residents of the affected community were also blamed for aiding and abetting the terrorists by providing information about troops’ movements and wonder how the military can succeed in the fight against terrorists when those they are supposed to be defending are the real enemies.

PRNigeria gathered that the recent retreat of soldiers from Mongunu occurred following betrayal of the troops by some locals who leaked some information to the terrorists and subsequent attacks from strange locations within the community.

Unfortunately, troops do not have the same leeway to operate like terrorists because they are bound to observe international rules of engagement.

The source added that: “Attacks or retaliation by the military on suspected areas occupied by civilians could be tagged as human right abuse and negating international conventions on rules of engagements.

“Allegations that the military failed to protect civilians despite being aware that terrorists were about to attack the towns are faulty if the evidence was that civilians were already moving from the places that were eventually attacked.

“First, I want to put it to you that citizens have been moving away from the entire region in droves in the last many months since the terrorists increased their pace of attacks and it is not only from Monguno, Baga or Konduga.

“These towns have been repeatedly attacked by terrorists and our men have repeatedly repelled them but how do we now begin to tell civilians to evacuate their towns because of this. Will it be to cause panic and make people think that we can no longer protect them?”