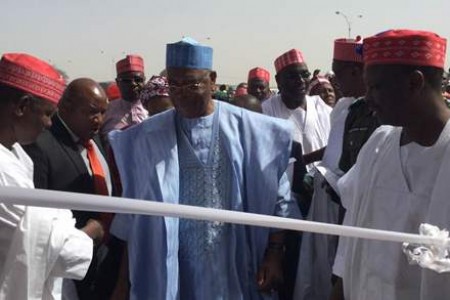 Former Minister of Defence, Theophilus Danjuma, has demanded the immediate arrest of some former Niger Delta militants for threatening to plunge the country into war if President Goodluck Jonathan is not re-elected in the February 14 election.He stated this on Wednesday in Kano during the commissioning of the multibillion naira Kwakwasiya city, one of the three mega cities built by the administration of Governor Rabi’u Kwankwaso.It would be recalled that, the leader of the Niger Delta Peoples Volunteer Force, NDPVF, Mujahid Dokubo-Asari; Victor Ben Ebikabowei, aka, Boy Loaf; Government Ekpudomenowei, aka, Tompolo; and other militants had last Saturday vowed to ensure that President Goodluck Jonathan, wins the February presidential election.The former militant leaders, who were evidently irked by the attacks on the President Jonathan’s Convoy in some states; spoke at a meeting in Government House, Yenagoa, Bayelsa State. The comments from these ex-militant leaders and their followers had suggested they would unleash violence on the country and take back Niger Delta oil should the president lose the election.They also said any attempt to dethrone Mr. Jonathan would be seen as a direct attack on the Ijaw nation. Neither the Federal Government nor the president, who is also Ijaw as the militant leaders, has so far reacted to the threat.Describing the statements as “reckless,” Mr. Danjuma, a retired army general and former Chief of Army Staff, who fought in the Nigerian civil war, said the threats by the militants were not only against national unity but also capable of plunging the country into war.He asked the security agencies and the government to immediately arrest them.“You should arrest Asari Dokubo, Tompolo, Boylop and other Niger Delta militants for making reckless statements, which in any way does not mean keeping Nigeria as one entity and creating war situation,” he said.The Nigeria Police Force and the State Security Service had recently threatened that they would move against anyone who makes inciting statements in the run up to the February elections.But since the militants’ comments were reported on January 24, both security agencies are not known to have taken action. Addressing the Yenagoa meeting, Mr. Dokubo-Asari deplored the alleged intimidation being meted to the people of Ijaw stock in Nigeria, saying the people cannot take it any longer.
He told his colleagues, “For every Goliath, God created a David. For every Pharoah, there is a Moses. “We are going to war. Everyone of you should go and fortify yourself.”Mr. Dokubo-Asari, who condemned the attack on Jonathan in the north in the ongoing presidential campaigns, maintained that the survival of the Ijaw nation rests in the hands of the militants gathered at the meeting.On his part, Boyloaf condemned the attack on President Jonathan in the north, saying nobody has the monopoly of violence. He said there is nothing like one Nigeria, pointing out that oil is the only thing binding Nigeria’s diverse nationalities together.
While maintaining that President Jonathan would win the election, he however said if the north takes the power away from Mr. Jonathan, the people of the Niger Delta region would take their oil back.He stressed the need for oneness of purpose among the people, urging them to keep their grudges aside and face the present challenges facing the Ijaw nation with solidarity.”Keep grudges and sentiments apart. We are ready to match them bumper to bumper,” Boyloaf said.