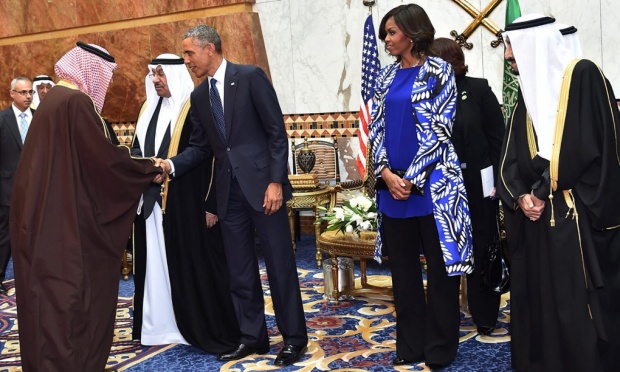 Michelle Obama has drawn attention to the severe restrictions placed on women in Saudi Arabia by not wearing a headscarf during a visit to the country after the death of King Abdullah.

US first lady’s decision to not cover her head as she and President Obama met King Salman bin Abdulaziz Al Saud has caused a stir on social media.

The US first lady’s decision to not cover her hair when she and President Obama met Abdullah’s successor, King Salman bin Abdulaziz Al Saud, on Tuesday caused a stir on social media, prompting the hashtag #michelle_obama_notveiled.

Obama’s decision to skip the headscarf illustrates the restraints placed on women living in Saudi Arabia, who are required to wear a headscarf and loose black robes in public. Most women in Saudi Arabia cover their hair and face with a niqab.

Saudi Arabia imposes many restrictions on women through the strict interpretation of Islamic sharia law known as Wahhabism. Genders are strictly segregated.
Her statement brought plenty of mixed reactions on Twitter:

#Michelle_Obama_NotVeiled I have no problem with her attire. As an American, I'm not impressed with kings or 12th century thinking.

Folks whining re: #Michelle_Obama_NotVeiled in Saudi, you have no right to tell any woman what to wear, regardless of who she is married to.

All the more power to her and other women in the region. It's a matter of choice, not rule. #Michelle_Obama_NotVeiled

She's exempted from the headcovering law in the kingdom cos she's the first lady ?!!? Sheer prejudice!! #Michelle_Obama_NotVeiled