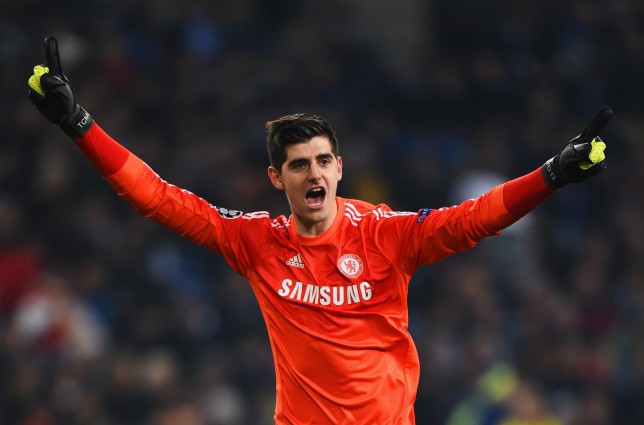 Chelsea’s Belgian goalkeeper, Thibaut Courtois is of the opinion that the Blues can win a quadruple this season. Courtois put up a scintillating performance on Tuesday in the first leg of the Capital One Cup semi-final against Liverpool which ended in a 1-1 draw. Chelsea has to win just one more match to reach the League cup final, are at the top of the premier league table, the fourth round of the FA Cup and in the knockout stage of this season’s Champions League.

With such bright prospects, Courtois believes the Blues especially those of them who are in their first season for the Blues will work so hard to win all trophies for the club.

“Myself, Costa, Filipe, Fàbregas and the rest of the team want to win trophies for Chelsea. That starts in the League Cup to the last game in the Champions League” .

“We want to win everything, it will be difficult, but I think we have the team to do it. Hopefully we can achieve it.”

Courtois revealed that it is the team’s target to win all four available trophies:

“It’s difficult to say if we could win all four but we are playing well. We have passed through all competitions. Now we are in the semi-final of the Capital One Cup, are top of the league, there is an important game in the FA Cup on Saturday which we have to win and soon we will be playing PSG in the Champions League. It will be hard but we have the team that can win everything. It’s what we’re aiming for.

“If you play a final and win it, you get that feeling to win trophies and you want to win more and more and more. That feeling is in the whole group now, especially after what happened last season when they didn’t win anything and were close to some trophies. You want to win everything that’s possible, starting with the League Cup.”

The Belgian who is just recovering from a broken thumb which kept him out of the Blues’ last three games also spoke about his time on the sidelines:

“I still had pain in my thumb and it’s not good to play if you know you can’t help the team at the fullest. We have another top keeper who was there to play so the thinking was about the team. I was able to train two or three times before this game at 100% so I was good to play last night. With the little protection I wear, I don’t feel anything, which is really good. I have no pain in the thumb now.”

Speaking about the League cup semi final second-leg which comes up next Tuesday, Courtois said a draw in the first leg was a result for the Blues and the return leg at Stamford Bridge will be tough for Liverpool as the Blues have not lost at home this season.

“I think the draw is a good result, it could have been worse”.

“Now the second leg will be like a final, in front of our fans, and I think we have to be able to win. We know we are strong at home but every game is difficult. Liverpool have been playing really well these last few weeks and are really dangerous. We know it will be tough but I think we are able to do more at home. We have to win that game.”