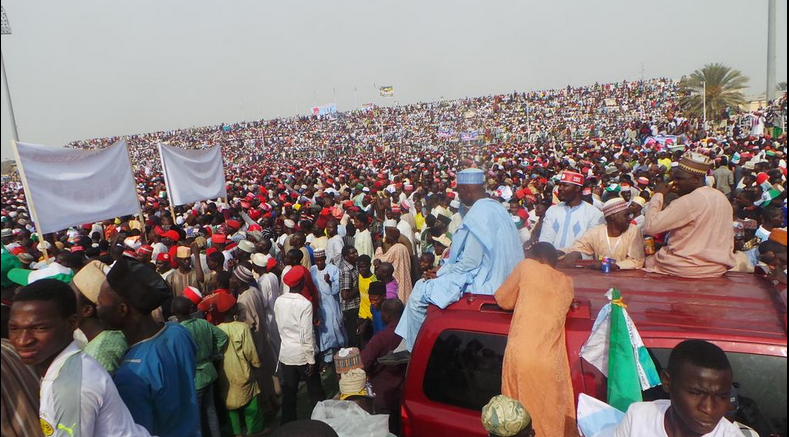 The motorcade of the presidential candidate was almost at a standstill with the crowd shouting Sai Buhari.

They had lined the route from the Airport to the Sani Abacha Stadium, venue of the rally.

Speaking at the rally, General Buhari, reaffirmed his commitment to tackle insecurity, unemployment and corruption, if elected in February.

Buhari made the remark at the presidential campaign rally and presentation of flags to the party’s candidates, held at the Sani Abacha Stadium, Kano.

“Wherever I go, I speak on three fundamental issues: insecurity, unemployment and corruption because they are the main challenges bedevilling the country,” he said.

He said tackling the three main issues was necessary, if the country was to move forward from its present state.

He, however, noted that it was only when the people elected him into office that he could realise the dream.

‘’So, I am using this opportunity to call on you, particularly the youth, to make sure you obtain your voter cards to enable you vote for us to assist you.

“All these noise will not help matters if you fail to come out and vote for the APC during the forthcoming elections in the country,” Buhari said.

He called on the party’s supporters to vote for the APC at all levels in order to ensure its success in the country.

Earlier, Governor Rabi’u Kwankwaso urged the party supporters to come out en masses in order to give all the party candidates block votes.

He assured the people of the state that Buhari would bring the desired change in the country if given the mandate.

Also speaking at the rally, the Speaker, House of Representatives, Honourable Aminu Tambuwal, urged the people not to be deceived by unnecessary gratification from the PDP.

Senator Lawani Shuaibu, while speaking on behalf of the national chairman of the APC, Chief John Oyegun, urged party faithful to obtain their PVCs.

Meanwhile, the Deputy Minority Leader, House of Representatives, Honourable Kawu Sunmaila, escaped death by whisker when he was nearly mob by irate youths when he entered the stadium.

Buhari Supporters Attack President Jonathan In Katsina, Scream “An Unbeliever” As They Stone The Presidential Motorcade