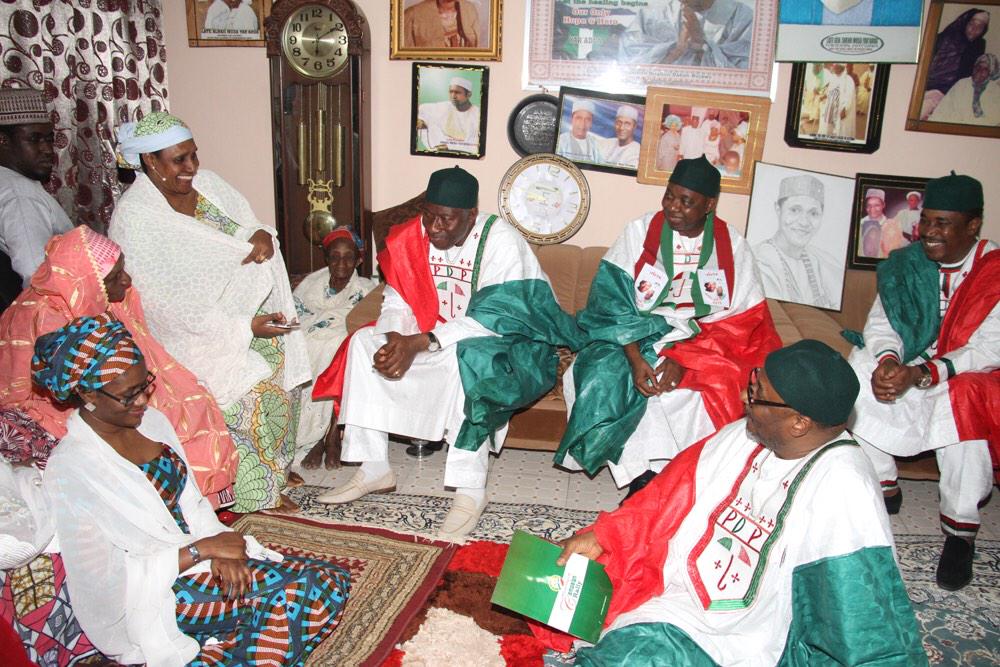 Security forces, on Tuesday, averted what was potentially an ugly situation, as hundreds of supporters chanting ‘sai Buhari’ attacked the motorcade of President Goodluck Jonathan in Katsina. President Jonathan pictured with the family of Late President Umaru Musa Yar’adua.

A combined unit of soldiers and anti-riot policemen dispersed the supporters as they surged forward with the intent to attack the president and his delegation, as they visited the house of Hajia Dada, mother of the late President Umaru Yar’Adua in her residence at Yar’Adua Quarters, Katsina.

There was palpable tension as the president’s convoy drove past the area, with hundreds of Buhari supporters brandishing brooms, the APC symbol and welcoming the president with chants of “sai Buhari,” while some could be heard calling Jonathan “arna,” an unbeliever.

The president was about to emerge from the residence of Hajia Dada when the crowd suddenly started to surge towards his convoy, but the timely intervention of the security forces who fired canisters of tear gas provided cover for the convoy to speed away.

As the convoy sped towards the Katsina Airport, the crowd hurled stones at it, but nobody was hurt in the motorcade.

As the president’s aircraft took off for Abuja, members of his advance party staying behind were advised to hide their identity, in order to prevent them from being attacked by mob.

Jonathan had taken his campaign to Katsina State, telling the people that he would not have been president but for the goodwill of the people of the state.

Addressing crowd of supporters earlier at the National Youth Service Corps (NYSC) orientation camp in the state capital, he recalled how he was chosen by late former president, Yar’Adua, to be his deputy in 2007.

Jonathan, therefore, assured them that as president, he would do anything required by Katsina people, even before they asked.

“But for you, I would not have been here today. It was your own son that brought me as his deputy. Anything that you want from me, we will do it without you asking for it,” he said.

The president said his administration had also established 38 almajiri schools in the state with about 18,000 pupils.

On insecurity in the North, he observed that it was a problem facing other countries of the world, adding that his administration had been able to deal with the situation so far because of its focus.

Jonathan asked them to vote for him and Sambo to enable them to continue to work for the peace and progress of the state.

Vice President Sambo, in his remarks, stressed that the Jonathan-led administration had given adequate attention to Muslims in his administration, in spite of being a Christian.