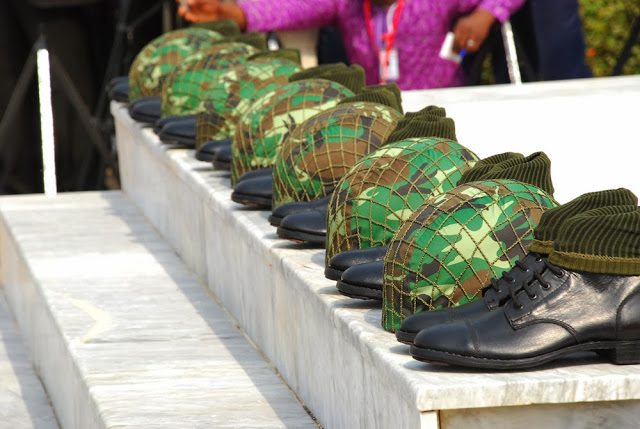 Nigeria is famously renowned (unfortunately so) as a country where we celebrate and shower accolades, honorary doctorate degrees, and national honors on the totally undeserving. A nation where we immortalize the same group of people that put us in the mess we are in today. We revere and worship those highly placed in society and subconsciously consider them to be our heroes. But are they truly the heroes of our beloved nation?

The answer is simple. The real and true heroes of our nation are the brave men and women that put themselves in harm’s way everyday for our sake. However, we do not celebrate and honor them enough as a nation; so I would like to use this medium to do just that.

The insurgency in Nigeria has claimed thousands of innocent lives, destroyed cities and is threatening the unity of our nation. The insurgents do as they please and the government, politicians and we, the citizens, play the blame game on who is responsible and who sponsors the terrorists, instead of gearing our efforts towards finding a lasting solution. Among all the madness and imprudence going on, the brave military personnel are in the frontlines battling to defend and protect us.

I want use this opportunity to thank the courageous military men and women for fighting to protect our country’s future and unity everyday. We honor and salute you for securing our future and the future of generations to come.

On December 17th 2014 we lost a hero in Major SK Umaru during a battle with Boko Haram. He was my Camp Commandant when I was doing my NYSC in 2010 at Jigawa State. I had not maintained contact with him since leaving camp but I remember clearly how kind-hearted and approachable he was. He was always smiling and trying to get to know us as friends even though he was the Camp Commandant. Major SK Umaru, you are gone but will never be forgotten.

I believe as Nigerians, we have been de-sensitized to a dangerous level. I can’t start to imagine what it feels like knowing your loved ones are in harm’s way for our country, knowing fully well that they can be killed anytime in the line of duty. To the heroes we lost and the families that have lost a loved one in line of duty for our country; we appreciate and applaud the sacrifice you have made for our dear nation.

“They are dead; but they live in each Patriot’s breast,

And their names are engraved on honor’s bright crest.” —Henry Wadsworth Longfellow

To those still serving and their families, our gratitude and admiration of your courage and bravery knows no bound. We say a big thank you for your continuous sacrifice to our fatherland. Those that have served us well and are retired now; we thank you for your service and role you played in keep our country united and free.

How often do we appreciate what our men and women in uniform are doing to secure our lives and properties? The sacrifices they make so that Nigeria will remain one, indivisible country. It’s about time we start recognising these gallant soldiers. Next time you see a soldier, tell him/her THANK YOU

As we get into the final week of the year, I want to wish my fellow countrymen a happy holiday season of joy, peace and continuous progress. May the New Year be better than 2014 for our nation.

Fahad Garba is a 2015 MBA candidate from Hult International Business School San Francisco and a firm believer of the unity and greatness of our dear country.

2015 Will Be A Tough Year For Nigeria – Goodluck Jonathan