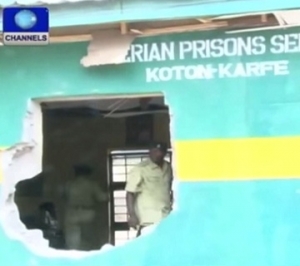 Nigeria’s President Goodluck Jonathan can no longer tolerate the ongoing festival of ‘prison breaks’ in Nigerian Prisons Nationwide and he has now stepped up to ensure that those assigned to do their jobs, do so.

For 2014, it has been a season of attempted jail breaks to jail breaks and the rascality has become an embarrassment to the Nigerian Nigerian nation. Not too long, there was an attempted break in Lagos where inmates of Kirikiri Medium prison allegedly embarked on a wild protest against the outgoing Deputy Controller of the prison after he assembled all of them to formally introduce his successor in october.

On November 3rd, 2014 the Koto-Karffi Federal Medium Security Prisons in Kogi State, where gunmen broke through the prison walls to set free all 145 inmates, vandalised the record office and threw the prison doors ajar.

The Kogi State attack is the second time in two years that the Koto-Karfi prison was breached to free inmates. In 2012, 119 awaiting trial inmates were also freed by the attackers and many never returned, and all those freed are said to be suspected members of Boko Haram sect.

According to eye witness accounts, the insurgents invaded the prison in a commando-style raid and operated for more than three hours unchallenged. He said the security operatives came when the damage had been done.

The assailants who were said to be about 60, had stormed the prisons located at Afao Ekiti Road,Ado Ekiti on Sunday night at about 10.30pm, according to eyewitness account.

The gang were said to have employed the use of dynamite to bomb the main gate before they can gain entrance into the prisons yard, 400 inmates were set free in the attack .

Sources at the Presidency say, Mr Jonathan cannot continue to manage the failure that has continued unabated and someone at the top had to pay the price which led to the removal of the Comptroller General of Prisons, Aminu Suleh, and his immediate replacement announced.

“In all the prisons attacked, its been done on Sunday’s, from Katsina, to Kogi state, and Ekiti, have you asked yourself why does it happen only on Sundays, it has been an inside job” another source who works with the Nigerian Prisons said.

Suleh’s removal came days after the Ekiti prison attacked by gunmen believed to be members of the Boko Haram terrorist group.

A source who spoke to NewsWireNGR on condition of anonymity says senior officers of the Nigerian Prison Service were colluding with terrorists to set free inmates and that information led to the approval of the appointment of Dr Peter Ezenwa Ekpendu as the new Comptroller General of Prisons.

But security analyst have also advocated for an overhaul of Nigeria’s prisons asking the Federal government to embark on total reforms as that will be the only way to stop the attacks suffered by detention centers nationwide.

Profile of the Newly Appointed Comptroller General Of Prisons

The new Comptroller General of Prisons is from Ibeku Okwuato in Mbaise Local Government area of Imo State in south-east Nigeria.

Kogi_prison_break
One of the prisons that were attacked by suspected members of the Boko haram sect. Prisons escaped through the wall ripped open.

His tertiary education was at University of Nigeria, Nsukka where he obtained his B.Sc (Hons) in 1981, MED in 1984 and PHD in 1988. Dr. Ekpendu also attended the Prestigious National Institute for Policy and Strategy Studies (NIPSS) Kuru Jos in 2007.

Before his present appointment as the Comptroller General, he held various positions in the prisons.

Before his new appointment, he was made Deputy Comptroller General (Administration) in 2012.