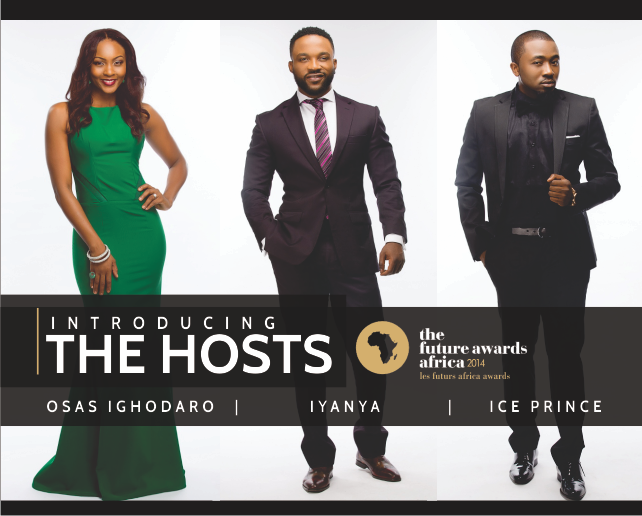 The hosts represent the brightest and best of young Africans in the arts from music to television, in the past year. They have been announced with an exclusive photoshoot anchored by TCD Photography.

Musical artiste, Iyanya has had an exceptional 2014, touring widely abroad and selling out concerts from London to Manchester. He scored five nominations at the World Music Awards including the landmark Word’s Best Entertainer of the Year.

“I am looking forward to hosting the continent’s exclusive evening of inspiration! We live in a culture where change agents aren’t celebrated enough,” said Iyanya. “It is us, young Africans who will transform the continent and I am proud to be one of the four hosts this year.”

Flavia, 23, is the Channel O VJ from Uganda. In 2013, she hosted the live premiere of the continent’s foremost reality show, Big Brother Star Game alongside its star host, IK.

“Young Africans are no longer spectators in our collective fate and the awe-inspiring selection of them that The Future Awards Africa celebrates points to this,” said Flavia. “Of course, I had to be part of the exclusive evening that rewards their creativity, innovation, enterprise. I know I will be inspired!”

Ice Prince, alongside hosting duties, is currently in the running for the TFAA Prize in Entertainment after having successfully elevated the rap genre in the past year with hit single after hit single. Signed to the formidable Chocolate City, his last album, Fire of Zamani was released last year to widespread critical and commercial acclaim.

Osas Ighodaro has had perhaps the best year of her career yet: hosting the Africa Magic Viewers’ Choice Awards, Maltina Dance All Show and starring as one of the lead actresses in the critically well-received Nigerian stage adaptation of ‘For Coloured Girls’.

The black-tie event holds on Sunday, 7 December at the Intercontinental Hotels in Lagos, Nigeria. It is strictly by invitation.

For more information, visit @TFAAfrica on Twitter/Instagram or the website www.thefutureafrica.com/awards. The official hashtags for the 2014 awards are #TheFutureAwards and #TheFutureAwards2014.