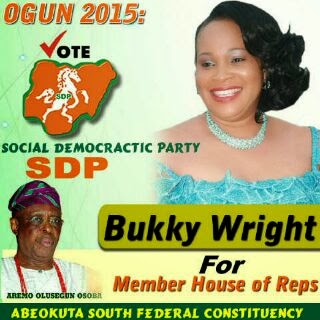 Popular Yoruba actress, Bukky Wright, has joined the league of Nigerian entertainers who want to be in government, come 2015.

She is contesting as a member of the House of Representatives at the the Abeokuta South Federal Constituency, under the Social Democratic Party.

For the 2015 general elections, Nigerian entertainers are sure not leaving the stage for the politicians any longer as they’ve moved in their numbers to stand for the various offices in their states of origin..