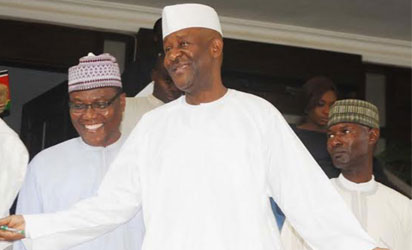 Governor James Ngilari of Adamawa State, yesterday, cried out to President Goodluck Jonathan to save his state from being overrun by Boko Haram insurgents who have already taken over five local governments and are advancing to other towns.

Governor Ngilari who was at the Presidential Villa, Abuja on a day Boko Haram spoke to State House Correspondents and here’s what he said.

“The security situation in Adamawa is very dicey right now and we are only trying to do our best to manage the situation. We are praying that it will improve, but it is really something to worry about”.

“There is a semblance of movement in that area. Really, we need a lot of intervention. We need to move more troops to secure the state. Really, it is a big challenge.”

The governor played down the seizure of the home town of the Chief of Defence Staff, saying that the issue of insurgency was much more than taking one person’s home town.

“We will do our best, but it is not something that we should leave in the hands of government. Everybody has a role to play in terms of giving out information timely, in terms of convincing people who are involved. They live with us, they are not from planet Mars, they are part and parcel of the society.”

Strategic town of Mubi in Adamawa State, among other towns in the North-east, and has renamed it “Madinatul Islam”, meaning the city of Islam and peace.

The terrorist sect has also assured trapped residents in the ancient city of the dividends of democracy, security, freedom and an all-inclusive government, and has taken the step of asking other residents who have fled to return to their homes.

The insurgents had sacked Nigerian troops from Mubi last week after a fierce battle and taken full control to establish their authority on the conquered town.

A trapped resident in Mubi, Mallam Aliyu Bala, confirmed that the insurgents have renamed Mubi and given it a new name – Madinatul Islam.

He said the insurgents have mounted checkpoints and are monitoring every nook and cranny as they mount surveillance all over the town, adding that they are making efforts to establish a new government in Mubi so as to extend its territories by conquering more towns in the North-east.

Bala, however, said despite the promises of safety and security by the sect, thousands of residents have been sneaking out of the city for the fear of the unknown.

42 Boko Haram Suspects Regain Freedom In Borno, Compensated With 100,000 Each