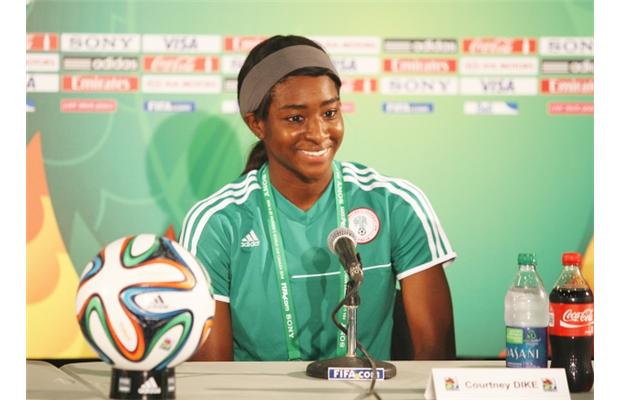 Oklahoma State Football team forward Courtney Dike has rejected the $7000 paid to her by the Nigeria Football Federation for participating at 2014 FIFA U-20 Women’s World Cup in Canada saying the honour of playing for the country was enough reward for her.

The 19-year-old, who is the younger sister of Super Eagles forward Bright Dike, represented the country at the competition where she scored the fastest goal in the tournament’s history.

NFF Head of Competition Sanusi Mohammed told Sports Radio, Brila FM, that the player rejected the outstanding allowances accrued to her for representing the country at the 10-day tournament.

Sanusi told Brila FM, “When we called her mother to confirm the delivery of the allowances, she declined it and insisted that the opportunity of playing for Nigeria was all the reward the family needed.”

Dike’s elder brother, Bright, featured for Nigeria at the 2013 Confederations Cup in Brazil but missed the 2014 World Cup by a foot injury which side-lined him for four months.

Meanwhile, the head of the Nigeria Women League board Dilichukwu Onyedinma tells PUNCH that the player deserves a national award for her patriotic act.

The Women’s league boss told Football live, a programme on Brila FM, that what Dike did was worth emulating by other players in the country.

Dilichukwu told Football live, “She is a star and patriotic Nigerian who put service to her fatherland above money. The minister is aware and we will push the act before the NFF so it can inspire many others.”

She added, “Doing this with the backing of her parents, Courtney Dike should be applauded and perhaps celebrated.”