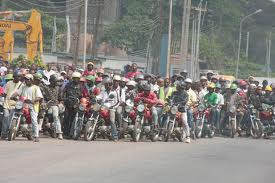 The Federal Government may soon ban the use of commercial motorcycles poupularly called ‘okada’ and ‘Achaba’ as a means of public transportation. This was the proposal of the Nigerian Council on Transport at its annual meeting in Enugu.

The proposal has also received the endorsement of the Minister of Transport, Senator Idris Umar.

The use of Okada has been banned in some states in Nigeria either wholly or for some restricted areas.

A statement from the Federal Ministry of Transport on Saturday evening stated that the ban of commercial motorcycle was one of the measures proposed towards adequate provision of safety and secure transportation in Nigeria.

It said the recommendation was contained in a statement of the week long meeting which had in attendance all the state commissioners of transport, permanent secretaries, directors and officials in the federal and state ministries of transport across the country.

The council advised all states in the federation to henceforth discourage the use of commercial motorcycles as a means of public transportation.

“All states and the Federal Capital Territory have therefore been advised to establish a public transport system that ensure strict regulation of the operation of public passenger transportation system through a well-articulated management system for enhanced safety, security, effective and efficient service delivery,” the statement said.

“The states are to also develop master plans for the development of intelligent transport system to facilitate the development and management of their transport operations in line with emerging trends and global best practices.”

Jonathan To Pray For Nigeria In Jerusalem