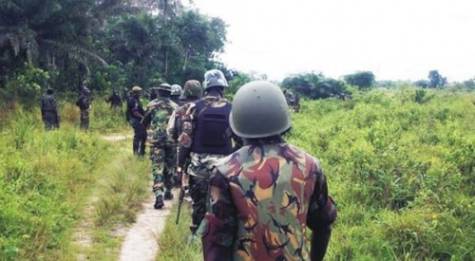 As part of activities to mark the Armed Forces Remembrance Day, the federal government has directed all military hospitals in the country to immediately commence the provision of Medicare to retired military personnel in the country irrespective of whether they had the money to pay or not noting that costs of such treatment should by credited to the National Health Insurance Scheme.

Chief of Defence Staff, Air Chief Marshal Alex Badeh who made the disclosure at the Armed Forces Remembrance Day briefing in Abuja, noted that the government policy was aimed at reducing the rate at which many ex-soldiers, who are now senior citizens, were dying due to their inability to pay for treatment.

readiness of the Army authorities to fly out any soldier who sustained serious injury capable on incapacitating such soldier in the current war of terror, to any part of the world to get best Medicare.

Chief of Army staff, General KJT Minimah said the decision was aimed at boosting the morale of soldiers in the battlefield, said s that they will be paid the arrears soon as steps were being taken in this direction.The minister pointed out that government was aware of the plight of the ex-soldiers but added that the modalities of accessing the money and ensuring payment were in the works.

“We have made provisions that officers and soldiers who are killed or wounded in action, disabled, incapacitated or permanently deformed as a result of our operations in the battlefield are well taken care of’

On why soldiers who die in action ar “If a soldier dies in action, such a soldier according to our rules, is buried in the cemetery in our barracks close to the battlefield. But for death occasioned by natural causes or sickness, the families of such persons have a right to determine where such a soldier or officer will be buried. In any of the burial however, the immediate family members must be represented”.

“Regarding injuries in battle, for operation ‘Zaman Lafia’, we have our hospital in Maiduguri for minor injuries that after treatment you can return to battle. If the injury is one that needs bigger attention, such wounded soldier or officer is transferred to the 44 Reference Hospitals, Kaduna where we opened a special unit”.

“But if the injury is very serious and capable of incapacitating such a soldier who has vowed to put his life on the line for the country, I have directed that such a soldier should be taken to any part of the world to get the best Medicare”.

In his address, General Gusau noted that the 2015 edition would be a special one because it coincided with Nigeria’s greatest security challenges in recent times.

“The Armed Forces Remembrance Day celebration affords us a unique opportunity to reflect on the sacrifices made over one hundred years by our service personnel to achieve global peace and security” he said.

“It is therefore appropriate to specially appreciate the commitment of our personnel that are paying the supreme price in confronting our security challenges so that we can live in peace.

“The contributions of the officers and men of the Armed Forces towards the return of peace to trouble spots in our country cannot be overemphasized.  The Remembrance Day period is therefore timed to reach out to the loved ones the fallen heroes have left behind and those who have been incapacitated in order to continue towards rehabilitating them.

He assured that funds realised from sale of the Emblem which would be launched by President Goodluck Jonathan on November 4, 2014, would be used to further the cause of the veterans, families and dependents of the fallen heroes.

Other activities that would feature in the celebrations include; the Nigerian Legion Humanitarian Day scheduled for Thursday, November 27, emblem launch by the president on November 4, 2014, Juma’at prayers on Friday, Jan 9, 2015, interdenominational church service/veterans night of songs slated for Sunday, Jan 11, 2015 and wreath-laying ceremony to be held on Thursday, Jan, 15, 2015 respectively.

Earlier, Chairman of the Nigerian Legion, Col Micah Gaya disclosed that out of N105m that was pledged by various individuals and organizations during the 2014 Armed Forces Remembrance Day, only the sum of N20m has been redeemed while about N85m was yet to be redeemed

Colonel Gaya noted that the inability of those who failed to redeem the N85million pledged, was affecting the noble programmes of providing scholarship for children of deceased veterans as well as providing for their Medicare.