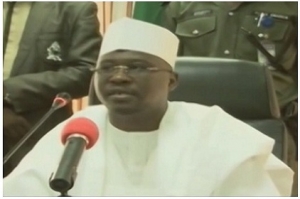 Former Acting Governor of Adamawa state, Alhaji Ahmadu Fintiri who was ordered to vacate the office on wednesday by the Federal High court has returned to the House of Assembly as the Speaker.

The chief press secretary to Fintiri, Solomo Kumangar made this known in a statement released on Thursday.

Fintiri who said he has appealed the judgement, thank Adamawa people for their support during his stay in office.

“Ahmadu Umaru Fintiri who has since resumed office as the Speaker of the Adamawa State House of Assembly also expresses gratitude to all State Legislators, Members Of the National Assembly, the Peoples Democratic Party, the opposition and the overwhelming majority of the people who not only shared his vision and zeal of rescuing and emancipating Adamawa State from the shackles of bad governance but rallied together with him to banish tyranny, tribalism and primordial sentiment from Adamawa State.”  Kumangar said