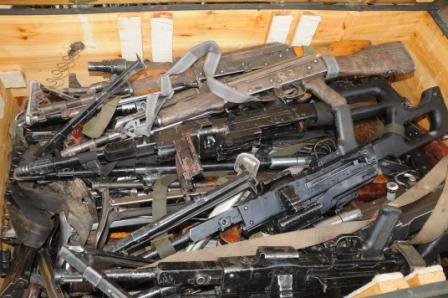 A South Africa-based media,  City Express has carried a news report that South African authorities have seized another US$5.7 million arms money from Nigeria. The Vanguard reports.

The paper said that the South Africa’s Asset Forfeiture Unit of the National Prosecuting Authority seized the $5.7 million for allegedly been the proceeds of an illegal transaction.

This report is coming just three weeks after the $9.3m seized by the South Africa Agency for an illegal arms deal involving two Nigerians and an Israeli. The news of the deal had caused much uproar in the country with many calling for a probe into the matter.

According to the City Express, the latest transaction was between Cerberus Risk Solutions, an arms broker in Cape Town, and Societe D’Equipments Internationaux, said to be a Nigerian company based in Abuja.

The deal reportedly fell apart after Cerberus which had earlier received from Nigeria R60?million (N1.02 billion) in its account at Standard Bank, tried to repay the money as it it could not resolve its registration formalities with the South African authorities.
“Cerberus was previously registered as a broker with the National Conventional Arms Control Committee (NCACC), but the registration expired in May this year,” City Press said.

“The marketing and contracting permits also expired at the same time. The company has since applied for re-registration, but the application lay in the NCACC’s mailbox for more than two months.
“Sources told Rapport that Cerberus apparently tried to pay the money back to the Nigerian company, after which the bank became suspicious,” the paper reported.
The paper added that while the NPA’s Asset Forfeiture Unit subsequently obtained a court order in the South Gauteng High Court to seize the money, the NPA spokesperson Nathi Mncube, said there were no indications the two transactions were related.
“However, both are now the subject of a criminal investigation and all possible information and connections are being investigated,” Mr. Mncube was quoted as saying