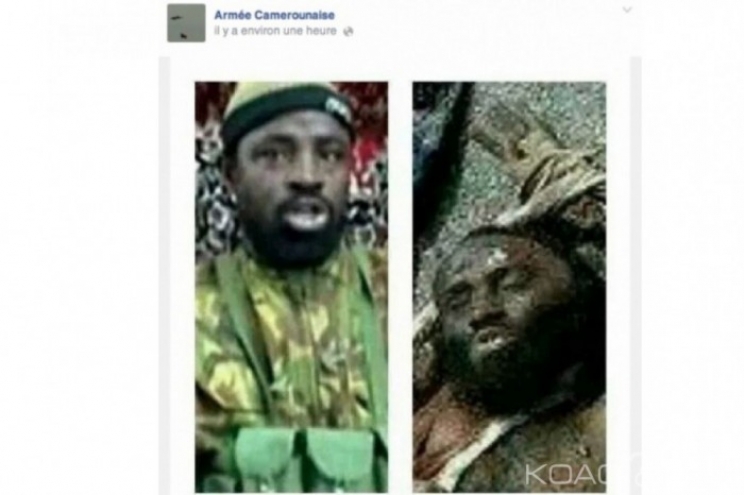 A fresh controversy has begun to take wings between Nigerian and Cameroonian Military over the reported killing of Abubakar Shekau, leader of the dreaded Boko Haram set.

A Cameroon media outfit, the Cameroon Concord had on Monday quoted a military source as having said that Shekau was killed on Saturday by the Cameroonian Army during a cross border aerial bombardment of his hideout in Nigeria. An image of the man said to be shekau was also published as evidence of the reported killing.

The paper added in the report that the Cameroon army had   been in serious combat against thousands of Boko Haram fighters trying to enter Cameroon through Fotokol from Gamboru Ngala in Borno State.

However, in a swift response, the Nigeria’s Defence Headquarters (DHQ) dismissed the claim that the said Shekau was killed by Cameroonian security forces within Nigeria.

The Director of Defence Information, Maj. Gen. Chris Olukolade, stated that there was no raid on any terrorists’ hideout by Cameroon or any other foreign country within Nigerian soil and affirmed that all operations were carried out by the Nigerian troops.

“There was no raid whatsoever by Cameroon or any foreign forces in any part of Nigeria’s territory in pursuit of terrorists as claimed in some reports allegedly quoting Cameroon authorities.

“All operations   in the environs of Kodunga and all associated border locations within the country are completely undertaken by Nigeria troops.”

DHQ had said on Twitter last Wednesday that troops who repelled an attack by insurgents at Konduga, Borno State, captured a high ranking terrorist leader who was being treated in military medical facility. The Nigerian troops   had engaged the insurgents in Kodunga, killing 150 of them and capturing a large cache of arms, ammunition and vehicles   on Thursday.

An intelligence source said that the military was still involved in moves to ascertain the identity of ‘the very prominent commander.”

“A seriously wounded high ranking terrorist leader is being treated in a military medical facility after he was captured in operation,” the tweet read.

The intelligence source, who also faulted the Cameroonian soldiers’ claim, added that the pictures by   the Cameroonian newspaper could have been taken last year when Shekau was said to have been injured at the Sambisa Forest but later died at Amitchide in Cameroon.

The source added that the military leadership looked for the grave of Shekau without success in Cameroon saying that the Cameroonian military would have issued an official statement if the claim was true.

The then Spokesman for the Joint Task Force, Sagir Musa, had said in a statement that Shekau might have died of gunshot wound during a shootout with insurgents at the Sambisa Forest on June 30, 2014. The announcement of his death was later debunked the Insurgents who then released a new video of shekau.

SaharaReporters, however quoted another military source as claiming that the killed commander was one Bashir Mohammed, the leader of the Uye camp of the Islamic sect.

It said that Mohammed, who   bore a striking resemblance to   Shekau and had appeared in a recent video, was killed when he led insurgents who were attempting to capture Kodunga and then seize Maiduguri.

It remains to be seen whether Shekau will re-appear again as he has previously done after he was reported killed.