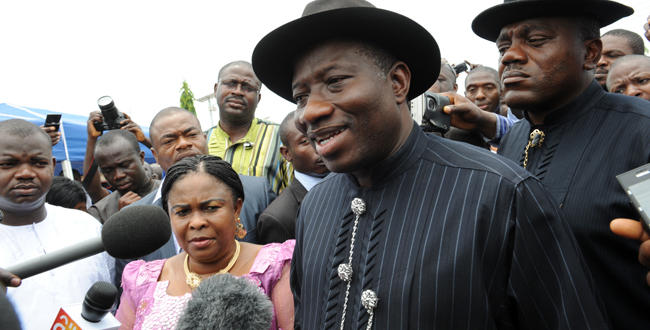 A non-political affiliate, Inner Coven Society Worldwide  and association of witches have declared President Goodluck Jonathan as the winner of the next year’s general elections.

The President General of the society, Dr Omo Ebosele while speaking to SunNews revealed that the election has already been concluded in the spiritual realm.

“The Inner Coven Society World-wide, as the minds that have traveled into the unseen and the unknown, is using this opportunity to say that the 2015 presidential election in Nigeria is a foregone issue. The election has been won and lost in the spirit realm. The candidate who by destiny has the overwhelming support of our society as well as other supernatural principalities in the high places is President Jonathan and he has won the election.”

According to the President-General, it would be a waste of time for any bother to contest against the President in next year’s elections. He claims that since 2011, principalities and forces have always favored the incumbent president

“The Inner Coven Society worldwide is not a political organisation; neither are we affiliated to any political party or association. Our society is the general assembly of all the witches across the various continents of the earth; we are not evil in our operation; we supernaturally discern and support any course that is meant for the good of the people across the various countries of the world.
Divine hand is solidly upon President Jonathan, but as it has been from the time of creation; the evil forces who do not mean well, who are out to scuttle divine agenda are against him. But there is no cause for alarm because the battle has been fought and won already in the spirit.
Our proof is we were also the first to warn that the 2011 election was going to be bloody in some states, and that two sitting governors were going to die in office before the expiration of their tenure, if the necessary spiritual intervention is not sought. Of course no one need to be told the of the bloody violence that erupted in some Northern states during and after the election and remember two governors who were involved in air mishaps, one of the two governors did not survive the air accident. The other survived it because of our spiritual intervention”.

Deviating from the 2015 general elections, Ebosele also said that the current Boko Haram insurgency will come to an end soon

“The issue of Boko Haram will soon fade out from our daily reality as a country. Our society is not evil in operations neither are we fetish, but we have supernatural powers to control events for the good of humanity”.

Atiku Dismisses Corruption Tag, Says No Corruption Case Has Ever Been Established Against Him