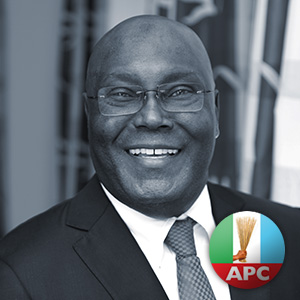 All Progressives Congress (APC) Presidential hopeful, Alhaji Atiku Abubakar, has described the corruption tag foisted on him as an orchestrated perception resulting from unfounded corruption allegations against him.

Atiku said that despite being investigated at various times, he had never had an established case of corruption against him. Atiku also dismissed the view that his chances as a presidential hopeful in the APC was tied to his ability to deliver Adamawa State during the October 11 governorship by-election in the state.

He seemed to also cast aspersion on the anti-corruption of all successive governments after the Obasanjo adminstration in which he was the Vice-President.

The former vice-president, who said all it required to tackle corruption was the political will, noted that the determination of the Obasanjo administration to stamp out corruption was evident in the number of people who were both charged with corruption as well as convictions on different grounds.

“My corruption allegation is again a function of perception. But corruption can be tackled through political will. No administration has tackled corruption like ours. More people were charged to court during our administration.

“I for one went out of my way to raise money for the EFCC to function. Yet I was the most investigated public servant and that perhaps explains the corruption perception,” he said.

Explaining that “most politically-motivated panels are often set up to persecute certain individuals”, Atiku maintained that he would decisively deal with corruption if elected president of Nigeria.

On insinuations that his presidential ambition hangs on his ability to deliver his state to the APC in the october 11 election, he said: “I don’t have to deliver Adamawa to be Nigeria’s president,” pointing out that both former Presidents Obasanjo and Umaru Musa Yar’Adua did not win their home states of Ogun and Katsina to emerge presidents.

He disagreed with the position that his decision to change political parties depicted inconsistency, adding that apart from being literally pushed out of the PDP preparatory to the 2007 elections, the factor of inconsistency was a problem with the system itself. He further stressed that he felt that the PDP had grown too big such that the country was moving towards a one party state.

“Changing parties has been a fight for internal democracy. Look at me, what is it that I believe in that I have not been consistent with? It is not really one who has not been inconsistent but the political system,” he pointed out, adding, “I would have been president a long time ago.”