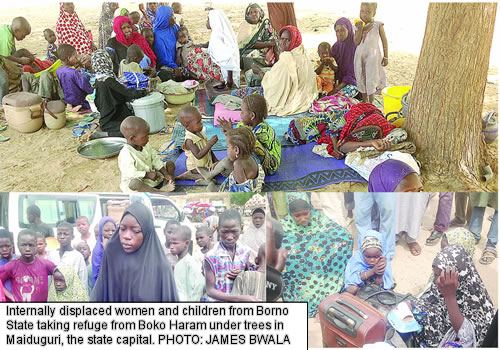 Ranking members of Boko Haram have acquired wives of Emirs who fled their palaces in the wake of the insurgents’ renewed onslaught on some communities in Borno and Yobe states, Tribune Newspaper reports.

No fewer than seven Emirs are said to have abandoned their Boko Haram-infested domains in the two states in the last couple of days.

A key member of the civilian JTF, Ahamdu Umar, who disclosed this to Saturday Tribune in Maiduguri, described the action of the insurgents as a violation of the sanctity of state, tradition and religion.

“They have sacked over seven Emirs from their palaces in Borno and Yobe states. Emirs are a symbol of culture and heads of Islam in this part of the country. If the Boko Haram members were truly Muslims, they would have had reverence for the palaces, they would have had respect for the Emirs and they would not have taken the wives of Emirs for their commanders (to use). This is sacrilege,” Umar said.

He said reports from some local governments areas showed that after taking over their palaces, the Boko Haram commanders, who then constituted themselves as lords in the affected Emirs’ domains, mocked the traditional institution by forcing their wives into “marriages.”

This development, Umar reasoned, showed that Boko Haram was not only against democracy, but it was also against tradition and Islam as a religion.

According to him, Nigerians must understand that this is not a religious problem but a case of some “cultists” trying to use Islam as a platform to perpetrate evil.

“Those who are sympathetic to this group among Muslims are doing so either because they do not know the atrocities these bad elements are committing or they are part of those that have been brainwashed by the sect leader when he was alive and therefore, they are also Boko Haram,” he added.

Umar declined to mention the palaces or Emirs involved, claiming that it would also amount to mockery on his part to do just that

“We wanted to go and die for our people and for the traditional stools in those areas captured by Boko Haram, but we were prevented from doing so by security operatives who said the casualties would be too many.”

Saturday Tribune also gathered that wives and children of soldiers are being relocated from barracks across Maiduguri so that the soldiers could focus on the ongoing preparation to engage the militants in renewed efforts by the military to end insurgency in Borno State and the North-East in general.

Meanwhile, security operatives and members of the civilian JTF have arrested no fewer than 50 terrorists within Maiduguri.

The suspects are believed to be part of the group that attacked Bama town during the week.

One of the suspects arrested on Wednesday, along Circular Road in Maiduguri, confessed to the civilian JTF men to being a Boko Haram member and that he was trying to escape the heat that had been brought on them by security operatives in Bama.

Another suspect, who was arrested at the University of Maiduguri with assorted mobile phones and iPads, told security operatives that he belonged to a team prepping to attack the institution while the larger group attacks Maiduguri, the state capital.

According to members of the civilian JTF, a lot of the sect members joined the residents in fleeing Bama town on Monday during the fierce battle with the military.

Meanwhile, reports from Bama said the airforce has continued to bomb terrorists’ positions in the town and adjoining areas.

The bombardment, military sources said, has resulted in the death of hundreds of terrorists. Indeed, a source claimed that close to 1,200 Boko Haram elements had been killed in the last 48 hours. The claim could not, however, be independently verified.

Recently, concerns in the Seventh Division of the Nigerian Army in Maiduguri over deaths of soldiers had caused wives of soldiers at Giwa Barracks to resist their husbands proceeding to Bama, as directed by the General Officer Commanding, General Mohammed Ibrahim, some time ago.

The enraged women got wind of the fact that their husbands had been directed to proceed to Bama, about 70 kilometres from Maiduguri, when the soldiers started gathering Armoured Personnel Carriers and loading weapons unto them.

On sighting the weapons, the women came out in their numbers, insisting that their husbands would not abandon them in the barracks to be killed by Boko Haram the way some of their friends were killed earlier in the year.

A reliable military source had said that the commander of the barracks had relocated to Bama and was waiting for his boys to join him for a clandestine operation.

“They blocked the road and all our weapons are now locked inside. In case of emergency, we do not have weapons to defend ourselves. The women are equally not armed but are very angry sitting down there with their children.

“They are saying that they will not be left alone without any soldier to protect them during this trying times, considering the fact that almost 2,000 people lost their lives outside and within the barracks the last time the insurgents launched assault this year.

“They are not ignorant of what is going on. They live in the barracks with their husbands and are aware that there are over 40 of the insurgents locked up inside the barracks.

“Leaving them alone is clear suicide and there is no guarantee that they will not be attacked by the insurgents who are always bent on releasing their own, regardless of where they are kept.

“You are aware of the fact that they tried releasing their people from the same Giwa Barracks this year. It is by the grace of God that some of us are alive now and surely not by the force of arms.

“It is the same barracks that they want all the soldiers again to move out from, close to the government house and move towards Bama,” the source said.

He told journalists that the decision to move the soldiers out of the barracks was flawed, which was why the women were protesting.