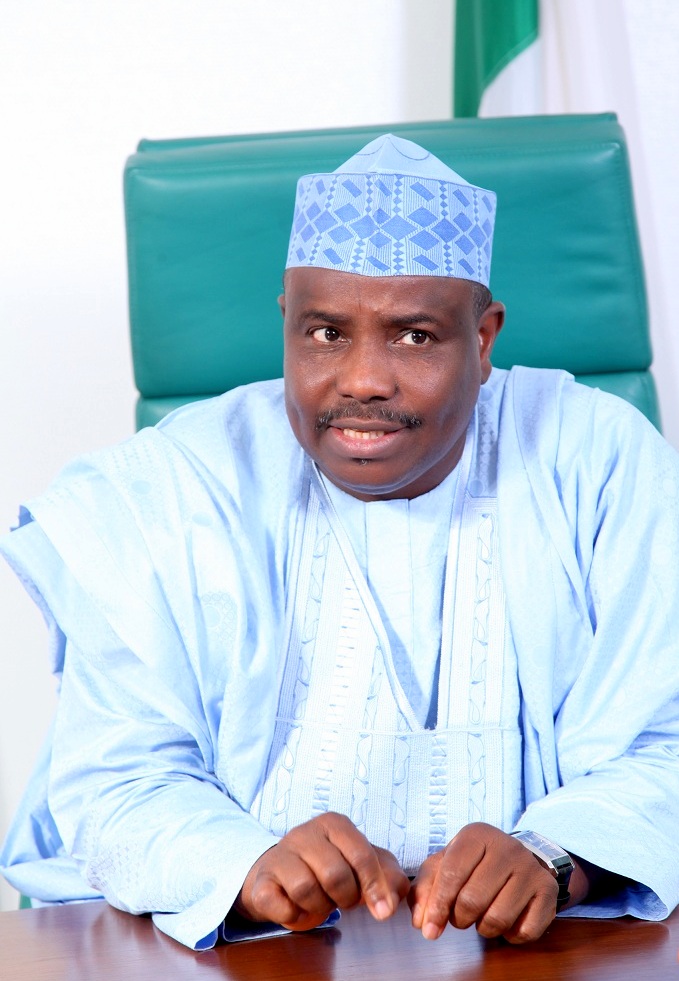 In this recent interview, the Nigerian Federal House of Representative speaker, Hon. Aminu Tambuwal discusses his rumored presidential ambition come 2015, the Boko Haram insurgency in the north, rumours of him joining the opposition All Progressives congress (APC) and many more topical issues. Here’s an excerpt culled from Thisday:

Are you satisfied with the preparations by the Independent National Electoral Commission for next year’s election?
I am happy that I have been able to collect my Permanent Voters’ Card as a citizen of this country. I commend INEC for their effort so far. It is not easy to manage electoral process of a country like Nigeria with a large population of over 150 million people, coupled with dearth of infrastructure, particularly information communication technology and power supply.

I sincerely commend them notwithstanding all these challenges; they have been able to achieve this. This is an improvement on the past exercises and I urge them to continue to improve until we get it right. So, I appeal to every Nigerian who has registered to go out and collect their permanent voter’s card. And for those that have attained the voting age of 18 years, they should go and register so as to exercise their civic responsibility.

Have you any advice for INEC?
INEC should continue to improve on the processes and should actually exert their independence and let the independence not just be on paper. As far as the legislature is concerned, we gave INEC first line charge to make them financially independent. It was not meant to be just on paper but meant to be actual and real; to have financial autonomy and a reasonable measure of independence.

Of course, the House of Representatives is in the process of amending the electoral act and will conduct a public hearing on the proposed amendment to the electoral act. They should come and attend and tell us how we can improve on the legal framework that they will be using to conduct the 2015 election.

And if they have any other challenges, they should feel free to approach the House to improve on the legal framework. All of us that are in this project of democracy are interested not only on what we have but also improving the process.

There are insinuations that the draft constitution of the National Conference is meant to perpetuate the tenure of those in office. Is it true?

First, the controversy over the ‘draft constitution’ has been resolved by the delegates at the National Conference. We have a constitution and all of us as citizens, as a matter of responsibility should obey the laws of the land. We should abide by the constitution no matter our ambition. On the issue that a leader or someone somewhere is trying to perpetuate himself in power is uncalled for. Some other leaders in the past right from the 70s have attempted but we have seen what happened.

So, Nigeria as a country is averse to any leadership that will want to perpetuate itself in office and Nigerians will take care of it. On the fate of the report of the Conference, the National Conference was convened by President Goodluck Jonathan and the National Assembly was only approached for appropriation for the conference. It is up to the President to determine what to do with the report of the conference and the National Assembly shall subject it to due process of legislation and that is all.

What is it with the rumour that you want to try out your presidential bid on the platform of the APC in 2015?

I am still consulting my primary constituency. I will definitely come back home and engage my people. You are aware that all politics are local and there is a proverb in Hausa language that every bird has a peculiar way of making its nest.

On 2015 and my future, by the God’s grace, I am still consulting and at the appropriate time, I will let you know. I am a lawyer and by nature a procedural person. What I request from you and all Nigerians is prayers and I believe for one that Nigeria deserves a better leadership.

The recent attack on Gen. Muhammad Buhari, Sheikh Dahiru Bauchi and the insurgency in the North-east have become worrisome and linked to 2015. What should Nigerians expect ahead of the polls?

I always maintained that as a parliament, we are doing our best to support the government to ensure we address the challenge of insecurity. We always appropriate funds budgeted as required by the executive and we have never reduced a kobo or allocation meant for security agencies out of the proposal sent to us by the executive. Second, we have given them the legal framework and also amended the anti-terrorism law.

Third, we have always passed the President’s request for emergency rule in the frontline states of Borno, Yobe and Adamawa. So far, we have done our best and the National Assembly has been supportive of every move the federal government deemed it fit to take to tackle the insurgency. We will continue to support the government to take the necessary steps to solve the problem.

Many Nigerians are apprehensive that the insurgency in the North-east may affect the 2015 election. Do you agree?
I commended the Yobe State Government for conducting local government election even with the insecurity problem. As you are aware, election was recently held in Afghanistan and even in Syria that is at war. So, I plead with our operators not to hide under any excuse not to conduct elections in the frontline states of Borno, Yobe and Adamawa.

If election was conducted in Afghanistan and Syria under real insecurity, why not in Borno and Yobe States? We should as a matter of priority provide adequate security for the conduct of election in the frontline states. You see, security threats in the country has been up and down and I must tell you that within their constraints, our security personnel have been doing their best despite the fact that their welfare is unattended to.

Recently, I was in Bauchi State and as I passed by the barracks, what I saw was an eyesore and from the outside, you could see that the welfare of our men is still unattended to and this is not helpful at all. These are men that have sacrificed their lives to protect the territorial integrity of the country.

So, we must as a matter of priority and as a government, cater for their welfare and give them adequate provision for their wellbeing as well as provide the required arms and ammunition. We have a responsibility to Nigerians to ensure that this democracy survives. You know that some people lost their lives to ensure that democracy thrives in this country. So, we have a responsibility to sustain this democratic process and the National Assembly is committed towards sustaining it.