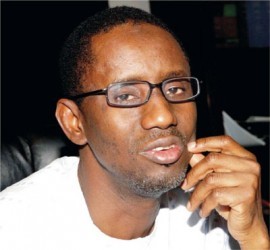 Presidential Candidate of the defunct Action Congress of Nigeria in the 2011 election, Nuhu Ribadu, is set to dump the for the ruling Peoples Democratic Party, Vanguard can authoritatively reveal.

The switch in party is to enable the former Economic and Financial Crimes Commissioner boss to secure the PDP gubernatorial ticket and contest the election slated for next year.

Competent party sources in Yola and Abuja confirmed that necessary steps had been put in place to enable the anti-graft czar to actualise his ambition of ruling the state under the PDP platform.

Vanguard’s Soni Daniel reports that one of the top sources confirmed to Vanguard last night that barring any last minute hitch, Nuhu Ribadu had concluded arrangements to defect to the ruling PDP on Thursday this week.

Although Ribadu had since made up his mind to dump the APC for PDP, sources close to him said that he needed to get the approval of the President before throwing his hat into the political ring.

The President, according to competent sources, gave a tacit approval last weekend for Ribadu to cross over to the PDP for the purpose of flying the party’s gubernatorial flag in the next election.

Two meetings were reportedly hosted in Abuja and Kaduna by those delegated by the Presidency to herald Ribadu into the PDP’s fold and assure him that he would be granted waivers to be able to run as its flag bearer.

In the Abuja meeting, a PDP chieftain from Adamawa Southern Senatorial Zone invited a couple APC chairmen from Adamawa together with a handful of former members of the state House of Assembly during the tenure of Governor Boni Haruna in the company of three members of the current PDP state EXCO with Ribadu in attendance.

The PDP bigwig, who happens to come from the same local government area with a top aide to Jonathan, informed the gathering that he was personally directed by Mr President to invite them to the meeting and inform them that the defection of Ribadu to PDP had the full support of the first citizen.

The Abuja meeting convener also said that all that they were required to do was to return to their wards and mobilise delegates in readiness for the party’s primaries that would soon take place.

The convener assured them that they should not be worried about the entry of the former EFCC boss into the race at the late hour since the party hierarchy was willing to grant him the needed waiver to scale through the race.

The meeting in Kaduna was coordinated by Ribadu’s close ally and former Minister in the Buhari’s government and had the son of a former PDP Chairman in attendance.

The development is said to have jostled other gubernatorial hopefuls in the state, who had worked round the clock to oust Murtala Nyako in order to have a smooth sail into the Government House.

It was not clear as at last night if the wave of opposition against Ribadu would thin down in the days ahead.

Contacted, one of Ribadu’s aides claimed that he was aware of his master’s intention to cross over to PDP but did not know the exact date.

US ‘To Send’ Untested Ebola Drug To Liberia