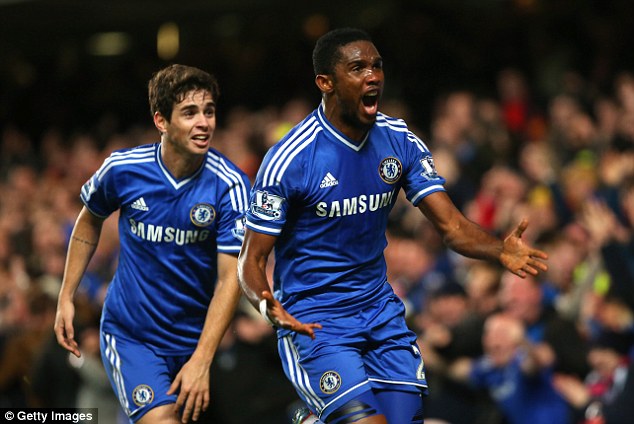 Former Chelsea striker Samuel Eto’o has been offered to West Ham but the 33-year-old is understood to want £100,000 a week.
The former Chelsea frontman is a free agent after his deal at Stamford Bridge ran out.

DailyMail UK gathered that Hammers boss Sam Allardyce, who needs a replacement for the injured Andy Carroll, also has an interest in Arsenal’s Joel Campbell but so do AC Milan.

They have also opened talks with Hugo Almeida over a proposed move to Upton Park. Almeida, who was earning £3m a year in Turkey, has offers from the Bundesliga and Portugal also.

The 30-year-old is a free agent but wants around £2.5million a year in wages. The Portugal international has been on West Ham’s list in the past two transfer windows but manager Sam Allardyce had concerns about the player’s fitness.

Under Jose Mourinho last season, Eto’o managed 12 goals in 35 appearances – with all of his strikes coming at Stamford Bridge, including a hat-trick against Manchester United.

Juventus are also interested in the 33-year-old after new arrival Alvaro Morata suffered an injury in his first training session.

Queens Park Rangers were prepared to hold talks with Eto’o’s agent after Harry Redknapp identified him as an option to lead the line for his newly promoted side – but the veteran’s forward £3million-a-year wage demands provide a major stumbling block for any deal.

Meanwhile, the Hammers remain favourites to sign Arsenal full-back Carl Jenkinson on loan ahead of interest from Hull.