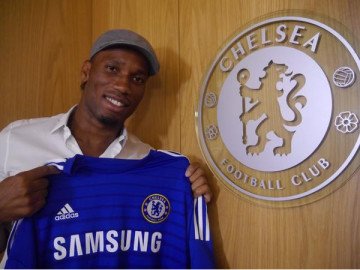 The legendary Blues striker left Stamford Bridge two years ago after celebrating Champions League glory, but has been lured back by Jose Mourinho

Goal.com revealed that Chelsea have completed the signing of Didier Drogba on one-year contract.

The 36-year-old returns to Stamford Bridge having left in 2012 after winning the Champions League.

Drogba, who featured for Cote d’Ivoire at the World Cup earlier this summer, has scored 157 goals in 341 appearances for Chelsea and has also won three Premier League titles, four FA Cups and two League Cups with the club.

“It was an easy decision,” the striker told the club’s official website.

“I couldn’t turn down the opportunity to work with Jose again. Everyone knows the special relationship I have with this club and it has always felt like home to me.

“My desire to win is still the same and I look forward to the opportunity to help this team. I am excited for this next chapter of my career.”

Drogba is reunited with Jose Mourinho after working with the Portuguese for three years before his departure in September 2007.

“He’s coming because he’s one of the best strikers in Europe,” the former Real Madrid and Inter coach said.

“I know his personality very well and I know if he comes back he’s not protected by history or what he’s done for this club previously. He is coming with the mentality to make more history.”