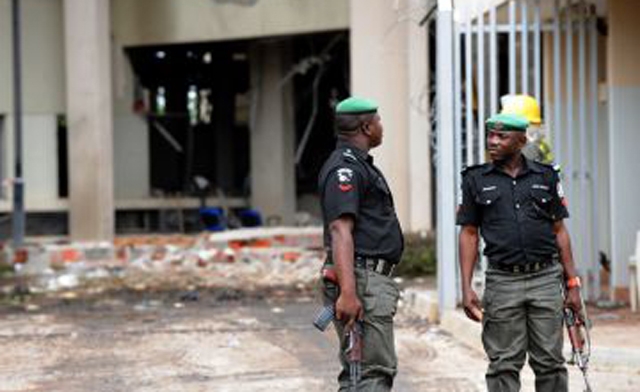 A number of churches in northeast Nigeria were attacked by suspected Boko Haram Islamists on Sunday, near the town of Chibok where more than 200 teenage girls were kidnapped in April.

In Kautikiri village, the gunmen, in a Rwanda-style genocide, locked up worshippers in the church and sprayed it with bullets, according to survivors.

Samuel Chibok, a survivor of the attack here, about five km from where the girls were snatched, said that around 20 men in a Toyota pick-up truck and motorcycles rolled into the village. They sprayed it with bullets, focusing much of their fire power on panicked worshippers in a local church.

“Initially I thought they were military but when I came out, they were firing at people. I saw people fleeing and they burned our houses,” he said, adding that some people had died in the attack, including two of his relatives.

“Smoke was billowing from our town as I left.”

A local pro-government vigilante, who declined to be named, said residents had now recovered 15 bodies from the village.

The attackers on Sunday made simultaneous strikes on three villages in the Chibok community, in Borno state.

Another attack on Kwada, eight km (five miles) from Chibok village, left dozens of people dead, a security source operating in the area said, although the precise toll was not yet clear.

A senior advisor to Borno state governor Kassim Shettima, who declined to be named because he was not authorised to speak, said there had also been a third attack on Nguragida, his home village which he visited on Sunday. Nine bodies had been recovered from that attack, he said.

Violence in Nigeria’s northeast has been relentless in the past year and has gained in intensity since April, when more than 200 schoolgirls were snatched by Boko Haram rebels from Chibok. Efforts to free them, which have attracted Western support, have so far not succeeded.

In a separate assault on Friday evening insurgents killed seven soldiers in the village of Goniri, in Yobe state, a security source and witnesses said.

The Boko Haram fighters arrived in four armoured personel carriers and 11 Hilux trucks mounted with anti-aircraft guns, said a security source and a witness who gave his name only as Hamisu.

“They were all dressed in full military but they did not direct their onslaught on the civilian population,” Hamisu said by telephone.

An explosion on Friday night in a brothel in the northeastern Nigerian city of Bauchi killed 11 people and wounded 28, police said on Saturday. This attack was also believed to be the work of Boko Haram.

A military operation in the northeast has so far failed to quell the rebellion and has triggered reprisal attacks that are increasingly targeting civilians, after they formed vigilante groups to try to help the government flush out the militants.

But their tactics – often striking then fleeing over the border into Cameroon – have repeatedly proved devastating. They are well armed and funded by a lucrative kidnapping operation.

Here are some of the deadly raids, kidnappings and bombings that have been linked to Boko Haram this year by Agency France-Press:

– February 15, 2014: An attack blamed on the extremist sect leaves more than 100 people dead in the mostly Christian village of Izghe in the north-eastern state of Borno.

– April 14: Gunmen kidnap 276 female high school students in Chibok, Borno. Fifty-seven managed to escape but the rest are still being held. Several foreign countries, including the United States, have joined forces to try to find the girls.

-April 14: A blast at a bus station packed with morning commuters at Nyanya, on the southern outskirts of Abuja, kills at least 75 people, the most deadly attack to date on the capital. Boko Haram claims responsibility. On May 1, a car bomb at the same spot kills 19, and leaves 80 injured.

– May 5: At least 300 people are killed in an attack in Gamboru Ngala, in Borno state near the border with Cameroon, which totally destroys the town.

– May 20: At least 118 are killed and 56 injured in two car bomb attacks on a market in Jos, central Nigeria, which go off within 20 minutes of each other. The regional governor blames Boko Haram.

– June 1: At least 40 are killed when a bomb explodes at a football stadium in Mubi in the north-east of the country shortly after a match. The attack is blamed on Boko Haram.

– June 3: Hundreds are feared dead in a suspected Boko Haram attack on four villages in Borno state, with local leaders putting the death toll as high as 500.

– June 17: 21 football fans are killed when a bomb rips through the viewing centre where they are watching the World Cup in Damaturu, northern Nigeria.

– June 24: Local officials report 30 killed and more than 60 women kidnapped in a series of attacks over several days in Borno state, although the Nigerian government denies the abductions.

– June 25: At least 21 people are killed and 17 injured in a bombing at a crowded shopping centre in the centre of Abuja. The attack — the third on the city in three months — is blamed on Boko Haram.

– June 29: Suspected Boko Haram gunmen riding on motorcycles target a number of churches during Sunday mass, opening fire on worshippers and chasing them into the bush. Witnesses fear dozens are killed.

Avoid That Cardiovascular Triggers, 6 Surprising Heart Disease Warning Signs (And What To Do)